Interviewed by his elder brother Krunal Pandya for MI's youtube channel after their IPL match, Hardik revealed how he felt when he saw Krishnappa Gowtham being handed the last over 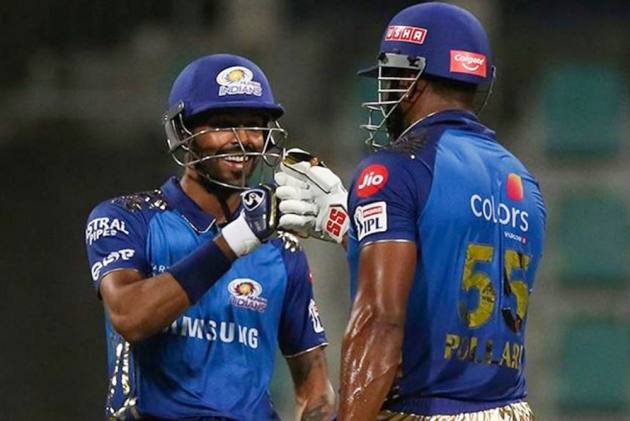 Mumbai Indians all-rounder Hardik Pandya says the very sight of off-spinner Krishnappa Gowtham being handed the ball in the 20th over of his team's IPL clash against Kings XI Punjab had him and his big-hitting partner Kieron Pollard excited before they hit him for 25 runs.

Pollard (47 not out) hit three sixes while Hardik (30 not out) got one maximum in that over which took MI to 191 for 4 after being invited to bat. The duo stitched 67 runs from just 23 balls. MI won the match by 48 runs.

Interviewed by his elder brother Krunal Pandya for MI's youtube channel, Hardik talked about how he felt when he saw Gowtham being handed the last over.

"It was very intense, it was more like mouth watering that an off-spinner bowling the 20th over. Me and Pollard, whoever misses has to stand at the non-striker's end and just watch, and that was me today. I missed two balls but Pollard made up most of it," he said.

The 26-year-old Hardik said he has always enjoyed batting with imposing West Indian.

"The number of times Pollard and I have done this is fantastic and I've always enjoyed it. When we went, it was a clear message for me that I should go hard and look to get some big runs at the end and get to a total that KXIP find difficult.

"We didn't aim for 191, but we were lucky enough that the big man (Pollard) had done it again.

"It is the belief we all in MI have, everyone in MI set-up has done some wonder. This is something happening often, again and again. That is fascinating," said Hardik who has been with MI for six years.

Krunal said when he came in to bowl in the fourth over, KXIP were going great guns (33/0) and he took it as a challenge to bring his side back into the game.

"When I came in the fourth over, they were doing really well, I was just making sure that I bowl according to the field. I was very determined as well and I took it as a challenge because they were ahead at that time.

"I thought this is the time if I bowled well here, we can get back into the game," said the 29-year-old Krunal, who returned with figures of 1/27 from his four overs. He got the wicket of Karun Nair.

Asked by Hardik how he has been able to bowl yorkers these days, Krunal said, "...you have to find your own way to ensure that the batsman don't go after you."