Delhi Capitals will be aiming to overturn hattrick of defeats in IPL 2020 and face Mumbai Indians in a top of the table clash in Dubai on Saturday. 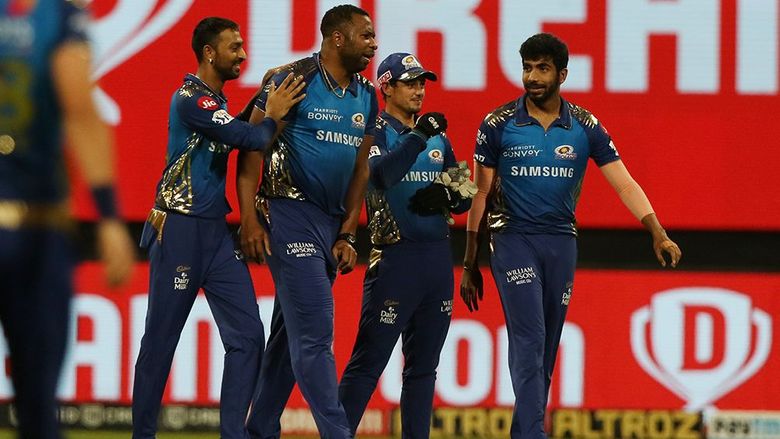 Their play-off berth secured, defending champions Mumbai Indians would look to add to the woes of Delhi Capitals, who are on a three-match losing streak, and consolidate their position at the top when the two teams face each other in their penultimate IPL league game here on Saturday.

Chennai Super Kings six-wicket win over Kolkata Knight Riders on Thursday  sealed MI's play-off berth. The defending champions are currently on 16 points and with an excellent net run rate (NRR), are almost certain to finish in the top two.

Despite three defeats on the trot against Kings XI Punjab, KKR and Sunrisers Hyderabad, DC are placed third with 14 points from 12 games, courtesy  their consistent run in the first phase of the league.

The three defeats should come as an eye opener for DC as they can ill-afford to take things lightly and need at least a win to seal their play-off place.

But it won't be an easy task as their last two games are against the top two teams on the table -- MI and Royal Challengers Bangalore.

If DC lose their last two games, it is entirely possible that KXIP will go past them on NRR even if they finish on 14 points and in such a case, the Delhi side could be eliminated if other teams on 14 have a higher NRR.

Going by paper, MI definitely have a clear-cut edge over DC and having confirmed their last four berth, the title holders would be playing without any pressure.

Regular skipper Rohit Sharma, who missed the last three games due to a left-leg hamstring injury, is unlikely to take the field again on Saturday, but there is no substantial word from the MI management in this regard yet.

While MI had roared back to form after thrashing RCB by five-wickets in the last game, there are problems aplenty for DC.

MI are unlikely to tinker with the playing XI, with their top-order firing on all cylinders.

Quinton De Kock would be hoping to continue his sublime form despite a rare failure against RCB and so would Ishan Kishan, who has been a revelation.

Suryakumar Yadav, who was ignored for India's tour of Australia despite his scintillating form this season, made a statement with a match-winning 79 against RCB the other day.

He along with De Kock and Kishan can take any attack to cleaners. Saurabh Tiwary though needs to convert his starts into big scores, while Hardik Pandya, stand-in captain Kieron Pollard and Krunal Pandya are known for their six-hitting prowess.

MI bowlers made a spectacular comeback against RCB after the hammering they received against Rajasthan Royals.

Jasprit Bumrah (20 wickets) and Trent Boult (17 wickets) have been lethal both upfront and at the death, while James Pattinson (11 wickets) and spin duo of Rahul Chahar (14 wickets) and Krunal (5 wickets) has provided great support in the middle overs.

DC, on the other hand, need to pull up their socks quickly after a hat-trick of defeats.

Their batsmen crumbled under pressure against SRH in their last game and were bundled out for 131 while chasing an imposing 220-run target.

Shikhar Dhawan(471 runs) has been in blazing form for DC, with two centuries but needs support from the likes of Ajinkya Rahane, who has replaced Prithvi Shaw, skipper Shreyas Iyer, Rishabh Pant, Shimron Hetmyer and Marcus Stoinis.

The South African pace duo of Kagiso Rabada (23 wickets) and Anrich Nortje (15) have been exceptional for DC, barring an off day for the latter against SRH.

Tushar Deshpande and Ravichandran Ashwin have been erratic off late and need to come good. Match starts at 3.30 PM