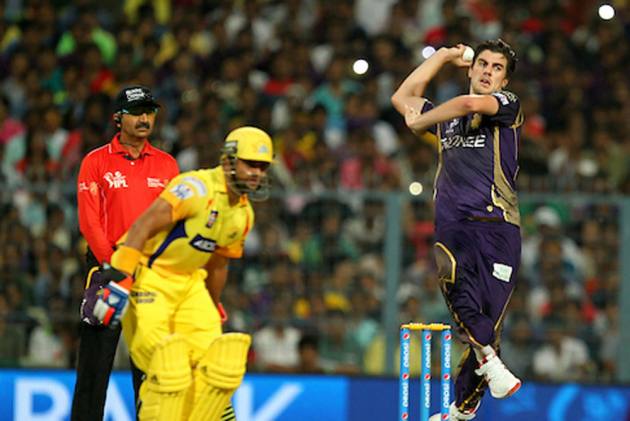 8:28 PM IST: Mark Wood, at 50 lakh, is unsold again. And with that concludes the phase one of the accelerated auction.

8:27 PM IST: Marcus Stoinis, with base price of 1 Cr, goes to Delhi for 4.8 Cr after a fierce bidding war. One would wonder what were the franchises were doing earlier.

8:17 PM IST: No such luck for Dale Steyn. No interest in the second round too. Andrew Tye also faces the same fate.

6:38 PM IST: James Neesham, at 50 lakh, is next. Sold to KXIP for the base price. And we are done with the all-rounders.

6:33 PM IST: Carlos Brathwaite, at 50 lakh, is the first. Unsold. Marcus Stoinis at 1 crore is next. The Aussie is also unsold.

6:18 PM IST: Set 11 for the second round for International batsmen. Shimron Hetmyer at 50 lakh. RR open the bidding.

6:09 PM IST: Varun Chakravarthy is the costliest uncapped buy. A cool 4 crore paid by KKR. And India U-19 captain Priyam Garg goes to SRH for 1.9 Cr.

5:57 PM IST: Riley Meredith, at 40 lakh. Aussie youngster is unsold. And that's all for uncapped pacers.

5:51 PM IST: Time for uncapped fast bowlers or pacers. Akash Singh, at 20 lakh, sold to RR for the base price.

5:50 PM IST: Vishnu Vinod at 20 lakh is also unsold. And that's all for uncapped wicketkeepers.

5:49 PM IST: Prabhshimran Singh and Ankush Bains at 20 lakh each are unsold.

5:45 PM IST: Shahrukh Khan, at 20 lakh, is unsold. And with that ends the uncapped all-rounder's round.

5:20 PM IST: Round for capped wicket-keeper, fast bowler and spinner done. Sheldon Cottrell is the costliest buy with 8:50 Cr to DD.  Nathan Coulter-Nile is second. He goes to MI for 8 Cr. Piyush Chawla goes to CSK for 6.75 Cr. Alex Carey, the only wicketkeeper to be sold today. He goes to lone bidders, RCB for 50 lakhs.

5:17 PM IST: Zahir Khan, 21-year-old Afghan spinner at 50 lakh, is unsold. And we have another break for five minutes.

5:01 PM IST: Nathan Coulter-Nile, with a base price of 1 Cr, is next. And some bidding for the Aussie fast bowler.

And we are into set three, for bowlers.

4:49 PM IST: And the Aussie wicketkeeper is sold to Delhi Capitals for 2.4 Cr.

4:45 PM IST: Ready for the second round, for the wicketkeepers.

4:35 PM IST: Pat Cummins shattered the record for the most expensive foreign buy ever. KKR doled out INR 15.50 crore for the Aussie pacer. DC and RCB were engaged in an intense bidding war but KKR joined the fray late and outbid the two franchises. Cummins broke the record held by Ben Stokes, who was bought by Rising Pune Supergiant for Rs 14.5 crore in the 2017 auction.

Another Aussie, all-rounder Glenn Maxwell went to KXIP for Rs 10.75 crore. Another big buy was South African Chris Morris, who was sold for Rs 10 crore to RCB. England's World Cup-winning captain Eoin Morgan made big money too, going to KKR for Rs 5.25 crore. Australia's limited-overs captain Aaron Finch went for Rs 4.4 crore to RCB. Chris Lynn was bought for his base price of Rs 2 crore by defending champions MI.

4:06 PM IST: Colin de Grandhomme unsold. Shocker! He should be back.

3:55 PM IST: Glenn Maxwell - With a base price of 2 crore. Massive bidding war for the Aussie all-rounder. Every franchise is bidding for him. Delhi go 750 lakh. And it's only warming up.

And with that the set 1 is done. Next all-rounders.

3:51 PM IST: Aaron Finch - With a base price of 1 crore is doing good business. Fierce bidding war between RCB and KKR. RCB get the Aussie T20 captain for 4.4 crores. Massive one.

3:42 PM IST: Robin Uthappa - with a base price of 1.5 crore, goes to Rajasthan Royals for 3 crore. Kings XI offered 2.6 crore for the wicket-keeper batsman.

3:40 PM IST: Eoin Morgan  - He is the second player, and he's generating lots of interests. Delhi Capitals offered 4.8 crore, but KKR beat them with a 5.25 crore offer.

3:38: PM IST: Patel helps Edmeades with the bag. Chris Lynn is the first player to go under the hammer.

3:32 PM IST: It's on. Brijesh Patel, IPL chairman, welcomes everyone.

3:00 PM IST: Delhi Capitals head coach Ricky Ponting has revealed their plans. "We'll look at two batters, potentially an all rounder and two fast bowlers. We've got a strong contingent of Indian players already so our main goal is to get the best players available," the Aussie legend tweeted.

Really excited for the #IPLAuction tonight. We'll look at two batters, potentially an all rounder and two fast bowlers. We've got a strong contingent of Indian players already so our main goal is to get the best players available. @DelhiCapitals

2:54 PM IST:  Here are how the teams look like ahead of the auction:

As many as 332 cricketers (186 Indian, 146 overseas players) will go under the hammer at the auction at a plush hotel at Kolkata with Australia's all-rounder Glenn Maxwell and veteran South African fast bowler Dale Steyn among those opting for the highest base price of Rs 2 crore. However, like previous editions, some lesser-known youngsters could walk away with big deals. IPL 2020 assumes added significance as it also coincides with the T20 World Cup year.

Kings XI Punjab have the maximum money to spend (Rs 42.70 crore) and will look to rope in a captain after India's premier Test off-spinner Ravichandran Ashwin was traded to Delhi Capitals. KXIP might go all out for England's World Cup-winning skipper Eoin Morgan or Australia's limited-overs captain Aaron Finch.

Kings XI also have a new head coach in Anil Kumble and the former India captain is likely to try and shore up their bowling arsenal despite having the likes of Mohammed Shami, Mujeeb ur Rahman and M Ashwin.

Heavyweights Chennai Super Kings and defending champions Mumbai Indians have more or less a set core of players retained and will look to buy back-up options in case of injuries. Both teams do not have a lot of money left in their purse and would look to spend smartly.

India captain Virat Kohli's Royal Challengers Bangalore will have their eyes on overseas players although they don't have too much purse remaining (Rs 27.90 crore) to play with. RCB, who endured a dismal season last time, have a new coaching staff and scouting system in place, and therefore it remains to be seen how they go about on Thursday.

Coming to Kolkata Knight Riders who have released big names like Chris Lynn, Robin Uthappa, and Piyush Chawla the onus would be to buy a dashing opener to replace the explosive Lynn and in terms of the purse, they have the second-highest remaining among the teams (Rs 35.65 crore). The likes of England's Jason Roy and Alex Carey could be options for KKR who also need a domestic spinner to replace the seasoned Chawla.

Like KKR, Delhi Capitals will also be on the lookout for good foreign buys having a strong core Indian contingent. Capitals don't have a big purse as KKR with Rs 27.85 crore remaining, so they might look to snaffle a smart catch at a low price who can come good.

Rajasthan Royals and Sunrisers Hyderabad will have to add to their domestic roster and within their purse, where Royals (Rs 28.90 crore) have an edge over Sunrisers (Rs 17 crore), the two teams will have to fish for efficient recruits and that can get tricky in a small auction.

The gala auction on Thursday will also see some of the lesser-known Indian players hog the limelight like it has been the case in previous editions.

Among those hopefuls are seventeen-year-old Yashasvi Jaiswal, the youngest batsman ever to script a double ton in List A cricket, tall left-arm spinner R Sai Kishore and Abhimanyu Easwaran.

The IPL would also provide a platform for players to test their skills against the best ahead of the T20 World Cup in October next year. Kohli, for one, could look to bat at No. 3 for RCB for continuity meaning the team has to look for an overseas opener during the auction.

All franchises will also be looking to rope in the services of West Indies big-hitter Shimron Hetmyer whose base price of Rs 50 lakh is another bonus. Hetmyer, 22, gave a perfect audition in the first ODI against India with a career-best 139. Another player who might go big is Australia's premier pacer Pat Cummins owing to his exploits across formats.

This is the first time the IPL auction is taking place in Kolkata and the buzz surrounding it is unmistakable at the home of KKR.