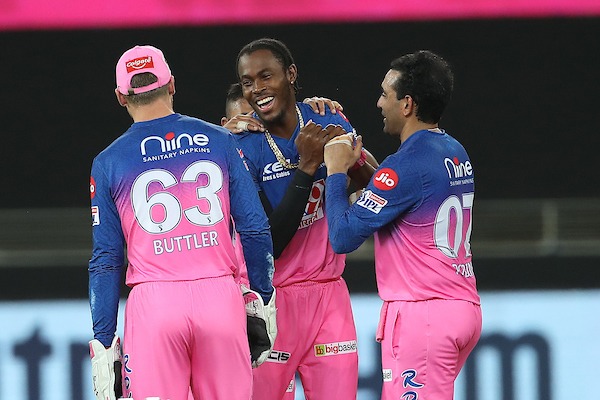 It was a forgetful night for Rajasthan Royals on Thursday. An eight-wicket loss has the side languishing at the seventh spot with eight points from 11 games. Not only did the side fail to post a decent total, but the bowlers failed to provide breakthroughs despite a bright start in defence of paltry 154. ( RR vs SRH HIGHLIGHTS | POINTS TABLE)

Rajasthan Royals skipper Steve Smith regretted not giving Jofra Archer, his lead pacer, another over up front. Archer had removed both SRH skipper David Warner and Jonny Bairstow with just 16 runs on the board.

"We started well, Jofra (Archer) taking two big wickets early but we couldn't keep the foot on the pedal. Vijay (Shankar) played smart innings and Manish (Pandey) took the game on and played really nicely, Smith said, adding, “I consulted a few other boys, it was talked about giving  (Jofra) Archer another over up front but opted against it and in hindsight, after what happened, probably would've given him one more over. It was on my mind.”

With Archer taken off from the attack, Manish Pandey (83no) and Shankar (52no) stitched an unbroken 140-run partnership to help SRH secure a comfortable eight-wicket win, which lifted the team to the fifth spot with eight points from 10 games.

"It (the wicket) got better as the game went on. It was one of those wickets which was quite hard to start on. We needed some more runs in the first innings," Smith said.

Although despite the loss, Rajasthan's playoff hopes are still technically alive and Steve Smith said he wants the side to focus on winning all the upcoming games.

"We haven't been able to pull back to back wins. We just need to keep winning and don't how things will work for us mathematically, we have to keep winning, that's our job now," Smith said.

"The challenge is pretty clear win three in a row and see where we are in the run rate. We have no option. It's about continue to prepare, continue to believe that we are good enough. The team has nothing to lose," he said.