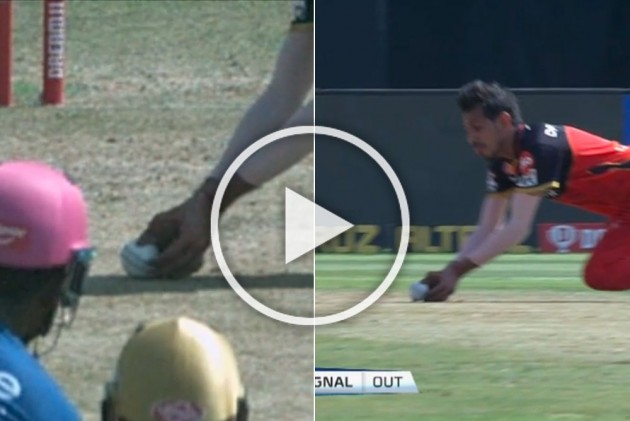 In the first afternoon match of the season on Saturday at Sheikh Zayed Stadium, Abu Dhabi, RR captain Steve Smith won the toss and elected to bat first. The decision looked a wise one, initially; but the former champions found themselves gasping for air. And by the fifth over, they were down three, with Samson joining Smith and Jos Buttler back in the hut.

But the wicketkeeper-batsman's dismissal was inconclusive, and the fans have their say. Many of them blamed the standard of the umpiring. Samson was ruled caught and bowled by Yuzvendra Chahal

The third umpire did have a look at the dismissal, but he opted to go with the soft signal, which was out.

And here are some reactions:

Even by going by the rules one pitch One hand is out, Samson is Not Out #RRvsRCB #RCBvsRR #IPL2020

#IPL20 sanju samson is not out clear ball touched the ground

Benefit of doubt should always go to batsman coz bowler will get 2nd chance, batsman won't.
In this case, I don't think there was that much doubt. #samson #RCBvRR https://t.co/zsPR2Eo7sD

Was #Samson really out? The ball seemed to touch the ground..

Whatever happened to "Benefit of the doubt goes to the Batsman"#RCBvsRR #IPL2020 pic.twitter.com/Z8GPDckWGt

Royals made one change in their playing XI, with Mahipal Lomror coming in for Ankit Rajpoot. Challengers fielded the same XI which defeated Mumbai Indians in a Super Over thriller.