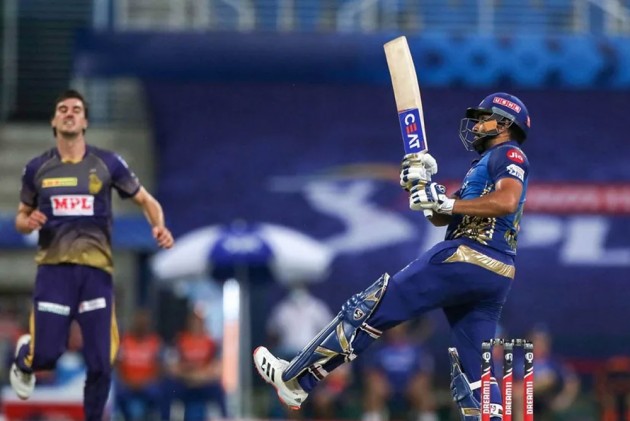 The opener played a blinding captain's innings with his knock at the Sheikh Zayed Stadium in Abu Dhabi coming off just 54 deliveries.

Rohit put on 90 runs with Suryakumar Yadav (47) for a second-wicket stand that frustrated the Knight Riders, who at least restricted Mumbai under 200.

Saurabh Tiwary (21) and Hardik Pandya (18) added valuable runs in a total of 195-5 that Kolkata never got near.

The impressive Jasprit Bumrah (2-32) dismissed Kolkata danger men Andre Russell (11) and Eoin Morgan (16) before they even got going.

Kolkata eventually posted 146-9 in reply, some way short of their target to start their campaign with a defeat, while Mumbai rebounded from an opening loss to Chennai Super Kings.

That's that from Match 5 as the Mumbai Indians win by 49 runs.

Rohit's knock included six sixes and three fours, with the unfortunate Kuldeep Yadav smacked straight over the ropes twice in the 14th over.

He now has 200 maximums in the IPL, 12 shy of MS Dhoni in third place on the all-time list, but still 126 short of leader Chris Gayle.

BUMRAH DOES THE BUSINESS

Russell and Morgan were well capable of getting Kolkata, who had slipped to 77-4, back into the match but Bumrah broke up a potentially dangerous partnership in the 16th over.

Bumrah knocked back Russell's leg stump before Morgan edged behind, leaving Mumbai to close on a first victory in the UAE from six attempts.