Coincidentally, both CSK and KKR have registered wins against Mumbai Indians and Royal Challengers Bangalore in the IPL 2021 UAE leg. 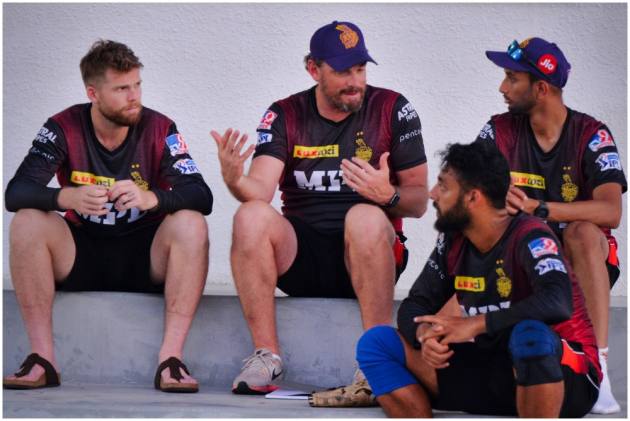 On a roll post-IPL’s resumption, both CSK and KKR would look to continue their winning streak when the two most impressive sides of the tournament’s second phase lock horns against each other in the second doubleheader.

Both CSK and KKR have registered two wins out of as many games post-IPL 2021’s resumption in the UAE, and the two sides would be desperate to outwit each other in their bid to register a hat-trick of victories.

However, Chakravarthy, who had tormented the CSK batters during last season in the UAE will like to once again ask probing questions to the likes of Ruturaj Gaikwad, Faf du Plessis, Ambati Rayudu and MS Dhoni on tracks where the ball would occasionally grip and come onto the bat slower than expected.

But it is in the standings where CSK hold an edge over KKR. While the Dhoni-led side is atop the pecking order with 14 points from nine games, KKR is at the fourth spot with eight points from the same number of matches.

Young Gaikwad has been ominous form at the top. After scoring a match-winning unbeaten 88 off 58 balls against MI, he made quick 38 against RCB on Friday and in the company of Faf du Plessis provided a good start for the team while chasing 157.

And Dhoni would want the youngster to continue in the same vein. After an unimpressive outing against MI, CSK batters lifted their game with Du Plessis (31), Moeen Ali (23), Ambati Rayudu (32), Suresh Raina (17 not out), Dhoni (11) all getting starts.

But it is the performance of the bowling unit which should be lauded as the bowlers were up to their task for the second consecutive match to hand CSK its seventh win of the season.

Dwayne Bravo (3/24) was brilliant with the ball against RCB, while Shardul Thakur (2/29) and Deepak Chahar (1/35) provided good support to the West Indian. KKR, on the other hand, had a dream start to the second leg after struggling in the first phase.

KKR is looking a completely different unit, in the manner in which they defeated RCB and MI. Rookie Venketesh Iyer had impressed all and sundry with his stroke-making in his first two IPL games. While he made a 27-ball 41 in KKR's 93-run chase against RCB, in the game against MI, the opener made 55 off 30 balls.

Shubman Gill is also in fine form and with Rahul Tripathi (74 not out off 42) to coming good, KKR’s batting looks in safe hands. The tall opener Iyer will face a different kind of challenge when Chahar starts swinging the ball both ways which will also test his skills considering he doesn’t have distinct footwork while playing the faster bowlers.

But skipper Eoin Morgan would be desperate to return among runs. On the bowling front, Chakravarthy, star all-rounder Andre Russell, Lockie Ferguson, Sunil Narine and Prasidh Krishna would hope to continue their fine show.

KKR will hope to continue playing in the aggressive fashion and win the title just like the 2014 edition when they notched nine victories in a row.