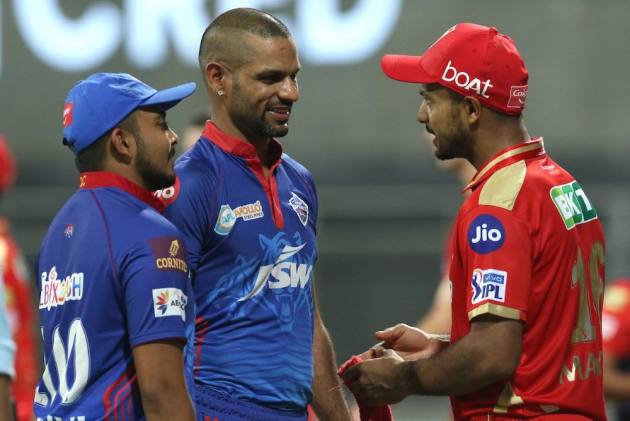 Shikhar Dhawan struck a blistering 92 as Delhi Capitals made short work of a 196-run target for a six-wicket win over Punjab Kings in the IPL in Mumbai on Sunday. Dhawan looked in sublime form during his 49-ball knock that was studded with 13 fours and two sixes. Dhawan was ably supported by Prithvi Shaw (32 off 15) first up and then skipper Rishabh Pant (15) and Marcus Stoinis (27 not out) as DC chased down 196 in 18.2 overs. Put in to bat, Mayank Agarwal and captain K L Rahul stitched a century-run opening stand to guide Punjab to a challenging 195 for four. Agarwal made 69 off 36 balls, while Rahul scored 61 off 51 deliveries as Punjab made a flying start to their innings. Chasing 196, Dhawan and Shaw made a quick start, sharing 59 runs in just 33 balls for the opening wicket.  Shaw continued his fine form and smashed a 17-ball 32 before being holed out to Chris Gayle off Arshdeep Singh. Dhawan continued his attacking strokeplay to bring up his fifty off 31 balls. Needing 71 off 42 balls, DC struck gold by picking up 18 runs off the 14th over. Dhawan hit Meredith for a hat-trick of fours, besides the bowler gave away another boundary off a wide ball as DC brought down the margin to 53 off 36 balls. Dhawan, however, fell eight short of a brilliant century when he was cleaned up by Jhye Richardson (2/41) in the 16th over. Get here highlights of DC v PBKS in Mumbai here.

7:30 PM IST: KL Rahul and Mayank Agarwal top open for Punjab Kings, Chris Woakes  has the ball in hand for DC. Scroll down for live commentary.

7:05 PM IST: Delhi Capitals have won the toss and opted to bowl first.

7:02 PM IST: Welcome to the live coverage of Delhi Capitals Vs Punjab Kings from Mumbai. News from the ground is Steve Smith has been handed DC cap.