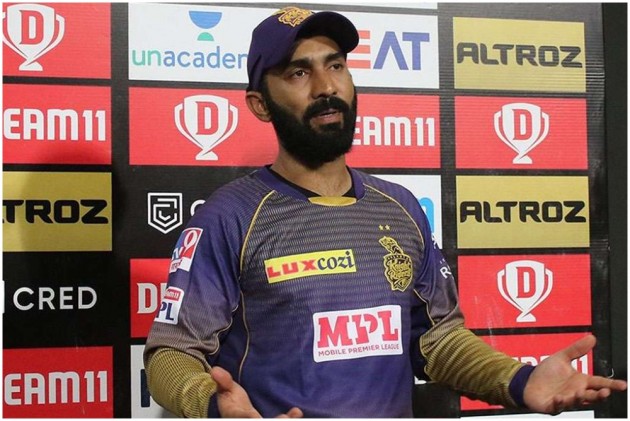 Kolkata Knight Riders (KKR) wicketkeeper Dinesh Karthik was reprimanded for breaching Code of Conduct during their IPL 2021 Qualifier 2 against Delhi Capitals in Sharjah on Wednesday, the IPL said in a statement.

Although the exact nature of the breach was not specified by the IPL, but it can be understood that Karthik was booked after he was seen dislodging a stump out of frustration after being dismissed during the high-voltage game on Wednesday.

“Mr Karthik admitted to the Level 1 offence 2.2 of the IPL’s Code of Conduct and accepted the sanction,” the statement read. “For Level 1 breaches of the Code of Conduct, the Match Referee’s decision is final and binding,” it further added.

Earlier, KKR sailed into their third IPL summit clash beating Delhi Capitals in a thriller on Wednesday. Chasing DC’s 135/5, openers Shubman Gill (46) and Venkatesh Iyer (55) gave KKR a flying start putting up 96 runs for the opening wicket in just 12.2 overs and looked well on course for a big win.

But the unthinkable happened after both the openers were back in the hut and the KKR batting lineup fell like a pack of cards. From 123/2 in 16 overs, KKR slumped to 130/7 within 22 balls.

Needing seven runs of the last over bowled by Ravichandran Ashwin, KKR lost Eoin Morgan and Shakib Al Hasan of consecutive deliveries before Rahul Tripathi hit a six straight over the bowler's head to seal the victory.

KKR will meet Chennai Super Kings (CSK) in the IPL 2021 final on Friday – a repeat of the 2012 final. The Kolkata-based side have been to finals twice (2012 and 2014) and they didn’t disappoint. However, this will be CSK’s ninth IPL final appearance.