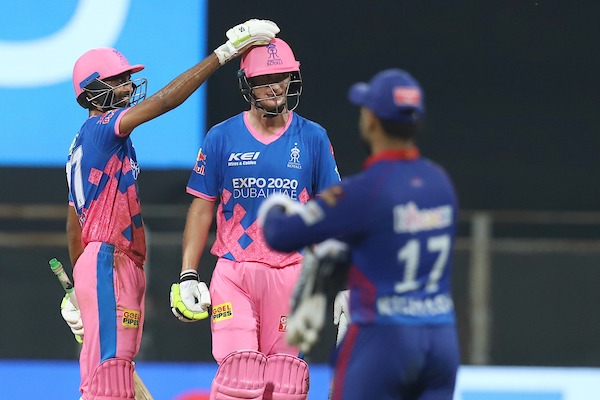 Chris Morris produced a timely 36-run unbeaten knock, studded with four sixes, as Rajasthan Royals defeated Delhi Capitals by three wickets in their IPL match at the Wankhede Stadium in Mumbai on Thursday. South African batsman David Miller produced a combative knock of 62 runs in Royals' chase while Chris Morris scored 36 to take the side over the line. Earlier, Jaydev Unadkat took three wickets upfront to rattle DC after RR elected to bowl. Unadkat's 3/15 helped RR to restrict Delhi Capitals to just 147/8. Delhi were 57/4 after 10 overs. Skipper Rishabh Pant top scored with 51 of 32 balls. Unadkat  dismissed Prithvi Shaw, Shikhar Dhawan and Ajinkya Rahane to trigger DC's top-order collapse from which they never recovered fully.  DC made a disastrous start as they were two wickets down for 16 runs in the fourth over with Unadkat dismissing the opening duo of Shaw (2) and Dhawan (9) cheaply. Ajinkya Rahane's (8) offered an easy caught and bowled chance to Unadkat. DC were 36 for 3 at the end of power-play but the slump continued as Marcus Stonis (0), foxed by a Mustafizur Rahman (2/29) delivery, checked his shot at the last minute to offer a running catch to Jos Buttler. The run rate started increasing once captain Pant came to the crease but still DC were 57 for 4 at the halfway mark. Pant, in excellent form this year, reached to his fifty off 30 balls in the 12th over, with a four off Mustafizur but he was run out the next over with bowler Riyan Parag's throw crashing onto the stumps. After Pant's exit, Tom Curran gave some respectability to the DC innings with a 16-ball 21.  Catch the match highlights of RR vs DC here.

7:30 PM IST: Shikhar Dhawan and Prithvi Shaw out for DC, Chetan Sakariya to start the bowling for RR. Scroll down for live commentary.

7:07PM IST: Both the teams have made two changes each.

7:03 PM IST: Rajasthan Royals have won the toss and opted to bowl first.

7:00 PM IST: Hello and welcome to the coverage of Rajasthan Royals and Delhi Capitals match live from Wankhede Stadium. DC's skipper Rishabh Pant started well, getting better of his mentor MS Dhoni and CSK in the first match, while it was heartbreak for Sanju Samson as his side lost to Punjab Kings. DC coach Ricky Ponting is seeing shades of Virat Kohli and Kane Williamson in Pant's captaincy. Find out more here