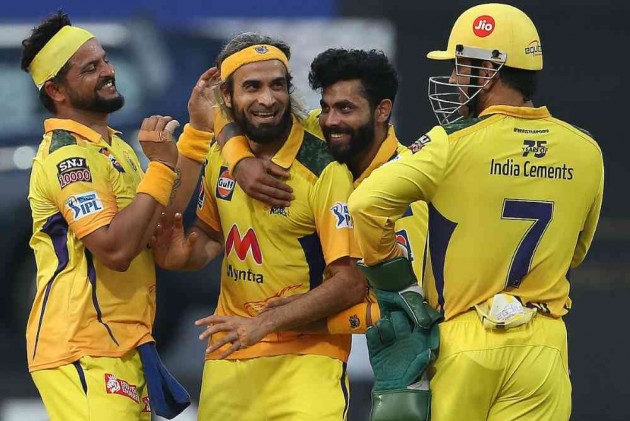 Bangalore's attack combined to shackle Chennai to reasonable effect until Jadeja – dropped on nought by Dan Christian – laid waste to the final over of the innings from Harshal Patel (3-51), taking advantage of a no ball to bludgeon 37 and finish on 62 not out in a total of 191-4.

The Royal Challengers will still have harboured high hopes after Devdutt Padikkal and skipper Virat Kohli chased down 178 without loss against Rajasthan Royals last time out, but there was to be no repeat of those heroics as they staggered to 122-9, Jadeja starring with 3-13 and a run out.

Faf du Plessis scored 50 for Chennai and combined in an opening stand of 74 with Ruturaj Gaikwad (33) to lay a solid foundation, although Kohli cajoled his attack in typical fashion to keep the Super Kings on a leash, with Harshal to the fore.

The right-armer's outing unravelled in spectacular fashion, though, seeing a length ball and a missed yorker disappear before over-stepping as Jadeja smoked him over midwicket.

The additional delivery was similarly dispatched by the India all-rounder to bring up a 25-ball fifty, before a drop at extra cover allowed Jadeja to swipe a full toss beyond long-on and score four more through square leg to complete the humiliation.

Buoyed by his majestic century last time out, Padikkal went briskly about his work, although he pulled Shardul Thakur to Suresh Raina to depart for 34.

He is here. He is there. @imjadeja is everywhere.

A direct hit and Christian is run out
Bowls a beauty that crashes into ABD's middle stump.
Jadeja has 3 wickets from 3 overs!https://t.co/wpoquMXdsr #CSKvRCB #VIVOIPL pic.twitter.com/Y10kHEqb7m

Kohli had already edged Sam Curran behind by that point and Jadeja ensured there was no way back for RCB. He had Washington Sundar caught at long-on from the second ball of his spell, while running out Christian in between bowling Glenn Maxwell and AB de Villiers showed everything the slow left-armer touched turned to gold.

Veteran leg-spinner Imran Tahir took 2-16 and ran out Kyle Jamieson for 16 as Bangalore fell well short and Chennai went top of the table.

Jadeja's merciless flogging of Harshal equalled the record for runs scored in a single IPL over – Chris Gayle having taken Prasanth Parameswaran of the now defunct Kochi Tuskers Kerala for 37 when in RCB colours back in 2011. Scott Styris' 38 at James Fuller's expense for Sussex against Gloucestershire in 2012 remains the all-time T20 record.

If ever anyone had due cause to lament T20 as a batsman's game, it was poor old Harshal. For three overs, he bowled beautifully and approached that fateful final set of six with figures of 3-14. Raina and Du Plessis departed in successive balls to leave him on a hat-trick, Harshal's off-cutters proving a tough code to crack until Jadeja explosively intervened.