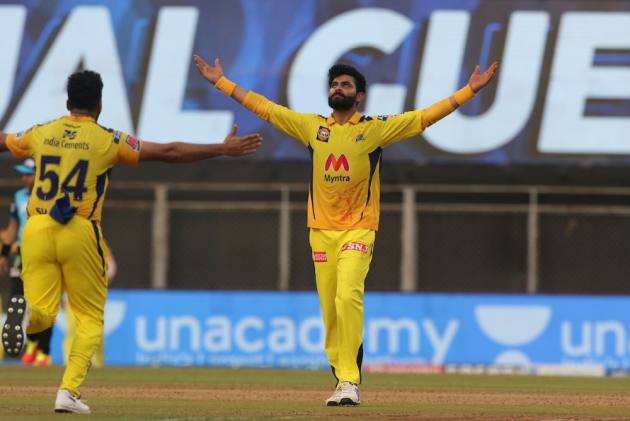 It was supposed to be the battle between two of India’s ace cricketers – MS Dhoni and Virat Kohli, but Ravindra Jadeja stole the show pulling off an incredible double, 28-ball 62 and then snaring 3/13 as Chennai Super Kings defeated Royal Challengers Bangalore by 69 runs in Mumbai on Sunday.

In the end Kohli had to concede that, “Jaddu displaying his skills took the game away from us. You can probably say one guy beat us.” And indeed Jadeja did.

Going into the last over, CSK were 154/4 and Harshal Patel had been taken for just 14 runs and had take 3 wickets. Patel was looking on fire. At the most, RCB thought they will concede 15 or 20 runs.

But Jadeja had other plans. By the time the over ended, Jadeja had hit five sixes and one four to plunder, record-equalling, 37 runs in one over. Harshal Patels’ 2/14 tally swelled to 3/51.

But Jadeja’s wasn’t finished. He took three for 13 and inflicted a run out, single handedly derailing RCB’s chase.

It’s for this that Sunil Gavaskar had heaped praise on Jadeja calling him ‘Jadugar Jadeja’. In the match against Kolkata Knight Riders Jadeja had taken four catches. Even India cricket team coach Ravi Shastri praised Jadeja. Shastri tweeted, "Not for nothing we call him Gary Jadeja. Sheer brilliance."

Jadeja's significant improvement in batting has convinced his Chennai Super Kings skipper Mahendra Singh Dhoni to give him ‘those extra deliveries’ that can change the complexion of a game.

"Jaddu is somebody who can change the game on his own. In the last few years, we've seen significant change in batting and it's worth it to give him that extra bit of time, extra deliveries," Dhoni said at the post-match presentation.

Jadeja who was named player of the match said that he has never had a better day on a cricket field.

"Don't think so (if he had a better day). I've been working hard on my fitness, skill, everything. Luckily it paid off. It's been a tough job being all-rounder, you have to do all departments," Jadeja said.

Asked how he works on his routine, Jadeja said: "During training, I don't work on all three, I do skill work one day, training one day, fitness one day."

Jadeja said that his skipper had tipped him off that Harshal will bowl outside the off-stump and he took his chances.

"I was just looking to hit it hard. Mahi bhai told me he would bowl somewhere outside off and luckily I connected." (with inputs from PTI)