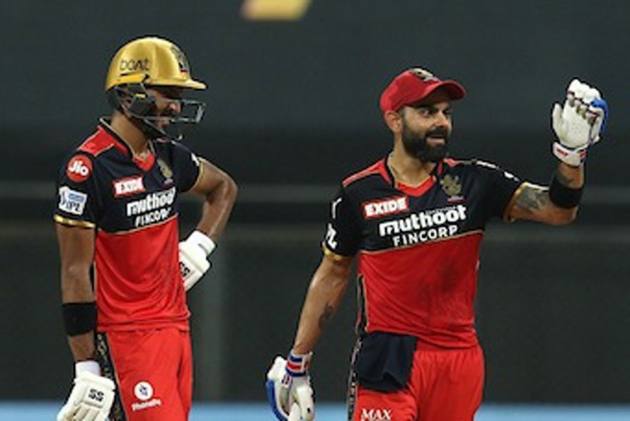 RCB made it four wins out of four to go top of the table courtesy of a magnificent run chase from their openers at Wankhede Stadium on Thursday.

The second-bottom Royals posted 177-9 in Mumbai following a poor start to their innings after Kohli put them in, Shivam Dube top-scoring with 46 and Rahul Tewatia making 40.

Mohammed Siraj was the pick of the RCB bowlers with figures of 3-27, while Harshal Patel claimed 3-47.

The imperious Padikkal and Kohli made light work of chasing down their target in only 16.3 overs, dishing out some brutal treatment in a sublime stand.

Padikkal made his highest IPL total with a sensational 101 not out from only 52 balls and Kohli was unbeaten on a classy 72 from 47 deliveries when RCB reached their victory target.

A dominant win for RCB puts them two points clear at the summit in what has been a dream start to the tournament for Kohli's side.

And that's what we call a PERFECT performance

India seamer Siraj struck two huge early blows as the Royals were reduced to 18-3 in the fifth over after being put in by Kohli.

He rattled Jos Buttler's off stump to send the wicketkeeper-batsman on his way for only eight and saw the back of David Miller for a second-ball duck, trapping the South Africa batsman leg before with a yorker.

Washington Sundar removed the dangerous Sanju Samson straight after he had hit him for six, before clean striking and improvisation from Dube and Tewatia - who had two sixes apiece - got Rajasthan up to a more competitive score than they had been in danger of posting.

Padikkal and Kohli put on a show

Padikkal was the main aggressor as RCB got the run chase off to a flyer, dominating the strike as Kohli ticked over at the other end.

It took Padikkal just 28 balls to reach his half-century and Bangalore had 107 on the board just 10 overs in.

Kohli clicked through the gears as he reached yet another landmark and Paddikal brought up a maiden IPL century in the 17th over, with victory almost secure. He cleared the rope six times and hit another 11 boundaries, while Kohli struck three sixes and six fours in a batting masterclass from the openers.