The equation is simple for Rajasthan Royals - win the remaining three games handsomely and stay in contention for the fourth IPL 2021 playoff spot. 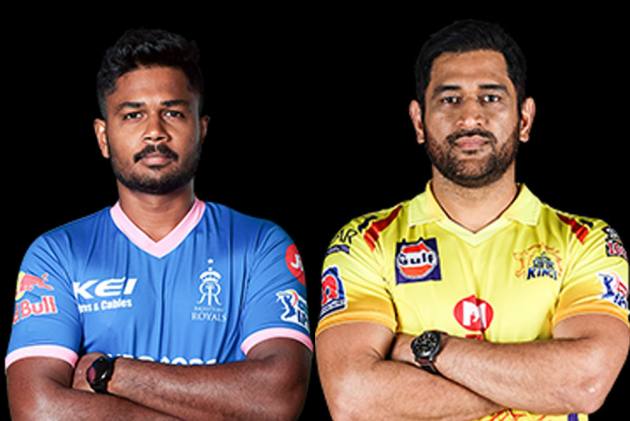 A play-off berth already sealed, former champions Chennai Super Kings would look to ensure that the momentum remains intact when they take on a struggling Rajasthan Royals in their Indian Premier League match in Abu Dhabi on Saturday.

CSK, led by the talismanic Mahendra Singh Dhoni, became the first team to seal a play-off berth with a six-wicket win over Sunrisers Hyderabad on Thursday.

They are currently leading the standings with 18 points from 11 games, followed by Delhi Capitals (16 points), Royal Challengers Bangalore (14) and Kolkata Knight Riders (10).

With eight points from 11 games, RR are placed second from bottom in the eight-team table and a loss on Saturday will end their slim chances of qualifying for the knockout stage.

The equation is simple for RR -- win the remaining three games handsomely and stay in contention for the fourth play-off spot.

But it would be easier said than done as in CSK, a formidable opponent awaits them first up against whom they lost by 38 runs in the first leg of the tournament in Chennai.

With four consecutive wins under their belt, CSK are on a roll. The yellow brigade beat defending champions Mumbai Indians by 20 runs, followed by victories over Royal Challengers Bangalore (by 6 wickets), Kolkata Knight Riders (by 2 wickets) and SRH.

And the Doni-led side would be keen to stay in good form as the tournament approaches its business end.

On the other hand, nothing is going right for RR as they suffered a hat-trick of defeats -- against DC by 33 runs and against bottom-placed SRH and RCB by 7 wickets respectively.

It's now or never for the Sanju Samson-led side as it fights to arrest the slide and stay afloat.

CSK's batting department has been impressive in the tournament so far.

The duo of South African great Faf du Plessis and Ruturaj Gaikwad have shown great chemistry up front while the likes of Moeen Ali, Suresh Raina, Ambati Rayudu, Ravindra Jadeja and Dhoni form the core of the middle-order.

Young opener Gaikwad has been in the form of his life, registering scores of 40, 38, 88 not out and 45, which provided CSK strong starts in the power-play.

CSK bowlers too have produced solid performances with the likes of Josh Hazlewood, Deepak Chahar, Dwayne Bravo and Shardul Thakur taking care of the pace department, while Jadeja and Ali in charge of the spin unit.

RR, on the other hand, were completely outplayed by their respective opponents in their last three matches.

Except for captain Sanju Samson and Yashasvi Jaiswal, most of the RR batsmen are struggling.

West Indian Evin Lewis gave some solidity up the order against RCB in the last match with a 37-ball 58, but Jaiswal once again gave away his wicket after getting a good start.

RR have been hit hard by their out of form all-round trio of Chris Morris, Riyan Parag and Rahul Tewatia.

Among bowlers, Kartik Tyagi, Chetan Sakariya and Mustafizur Rahman have done reasonably well for the side, but Morris, the highest paid IPL player this season, has let the side down.