The five-time champions Mumbai Indians are aiming for a hat-trick, which would be a first in the tournament's 14-year-history, but poor show by their batsmen has led the team down. 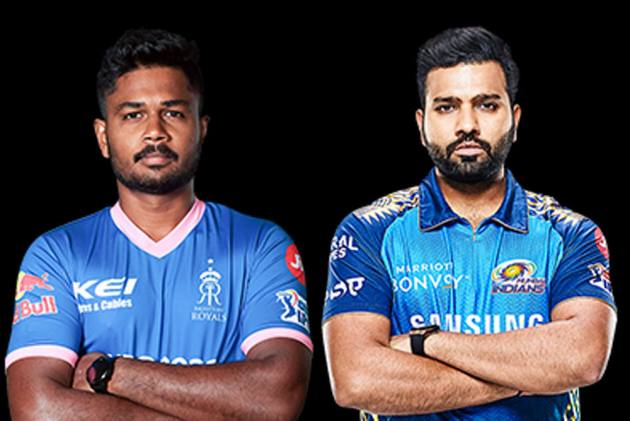 Mumbai Indians' mega-stars will be making one last ditch effort to put their derailed Indian Premier League campaign back on track when they take on a confident Rajasthan Royals in their penultimate league match on Tuesday.

The five-time champions were aiming for a hat-trick, which would be a first in the tournament's 14-year-history, but poor show by their batsmen has led the team down. The wrinkles on Rohit Sharma's forehead and the grumpy look on his face are telling a tale that is unheard of in the MI contingent till now.

And in this backdrop, they are now facing Rajasthan Royals, who stunned Chennai Super Kings with a superlative batting performance from two Mumbai men -- Yashasvi Jaiswal and Shivam Dube.

The equation is simple for both the teams.

They have to not only win both their matches but also have to win big so that their poor net run-rates are taken care of.

Royals currently have a net run-rate of -0.337 and MI, after a poor batting show against Delhi Capitals, are seventh at -0.453.

The loser on Tuesday will be out of the tournament but then KKR are already on 14 points with a positive NRR of +0.294.

Therefore even if Mumbai win against Rajasthan and then happen to thrash laggards Sunrisers Hyderabad in their final match to reach 14 points, there's no guarantee that they would be able to go through.

KKR have won a very crucial game against SRH and even if they lose against Royals on the final day of the league stage, Morgan and his men would like to limit the damages in order to make it to the play-offs.

Hardik Pandya has just about found some form going his way. the Sharjah pitch showed signs of settling down during the Punjab Kings versus RCB game, something that will make the stroke players of MI happy.

The Royals bowling attack, with Mustafizur Rahaman as their most experienced overseas signing, is a bit thin on experience.

It remains to be seen how the likes of Chetan Sakariya, Mustafizur and the rest of the bowlers stop the heavy artillery firing expected from the Mumbai ranks.

Similarly, Jasprit Bumrah, along with Trent Boult and Rahul Chahar, will have the job cut out against the opening pair of Jaiswal and Evin Lewis, who literally butchered the Chennai attack which didn't have Deepak Chahar and Dwayne Bravo in their ranks.