Tyagi bowled a sensational last over as RR pulled off an incredible two-run win over Punjab Kings in an IPL thriller. 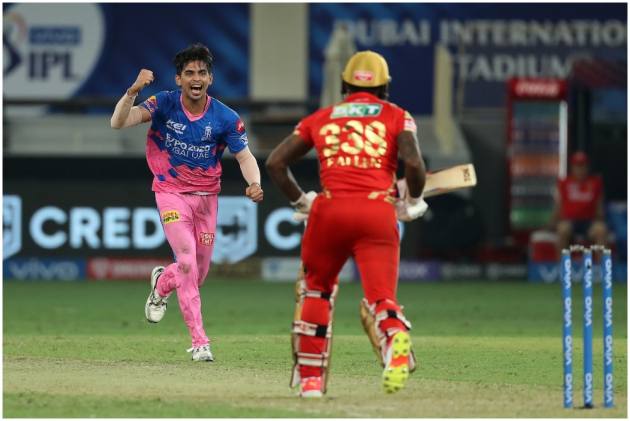 Rajasthan Royals all-rounder Riyan Parag lavished praise on young pacer Kartik Tyagi, who helped his team pull off a two-run win over Punjab Kings in their IPL match, saying it was the ‘number one’ spell he has seen in his cricketing career. (More Cricket News)

“I think, 100 percent, it is the number one spell I have ever seen in my cricketing career. But then I hope he (Kartik) does it in the rest of the games and wins us more matches,” Parag said at the post-match media conference on Tuesday.

Tyagi bowled a sensational last over as Rajasthan Royals pulled off an incredible two-run win over Punjab Kings in an IPL thriller at the Dubai International Stadium. Punjab Kings required four runs off the final over but Tyagi dismissed Nicholas Pooran (32) and Deepak Hooda (0) and gave away only one run to snatch the win for his team.

Parag said that he pushed pacer Mustafizur Rahman to take the game to the 20th over. “We were in the driving seat after the first innings, but then I think, we were poor in the field and then the game was slipping away from us.

“Then in the 19th over, I told Mustafizur (Rahman), don’t let it finish in this over and we have a chance with Kartik bowling the 20th and those boys were insane, defending eight runs off the last two overs, that is just incredible,” the Assam player said.

Parag also said that he had kept the helicopter shot in his armoury as he bats in the death overs, where bowlers mostly bowl yorkers. “I think, this is such a shot (the helicopter shot) which should be in your armoury because I mostly bat in the death and most of the bowlers perfect the yorkers, so I am just keeping an option. If it is a yorker or is in my line, then I can use helicopter (shot).

“It did not pay off well today, but I am confident that in the next match, I get the same ball, I will try the same thing,” added the 19-year-old Guwahati-born right-handed batsman. He admitted that he had an off day in the field.

“It was just a bad day, we rate ourselves as really good fielders, I rate myself as one of the best fielders and it's at the end of the day even I am human. I can drop a catch too. But we have got two practice sessions after this and work really hard on that and hopefully from the next match (we are) even better fielding side,” he quipped.

Rajasthan were bundled out for 185 in exactly 20 overs after they were going strong at 169/5 in 17 overs and according to Parag it was a bad day for the lower-middle order.