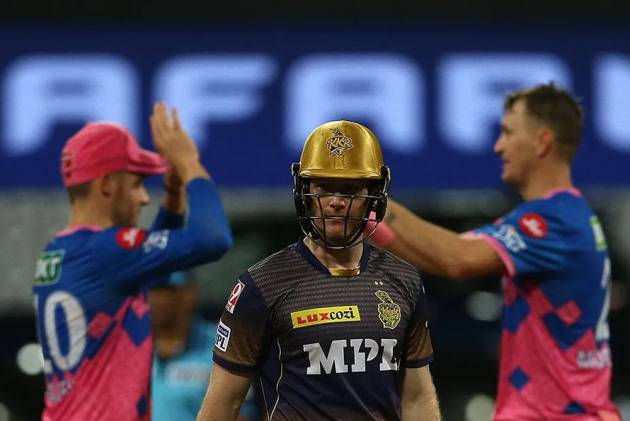 Skipper Sanju Samson could not have asked for a better show from his pacers, who scripted Rajasthan Royals' six-wicket win, while Eoin Morgan rued his side's ordinary batting performance in the IPL in Mumbai on Saturday.

The Royals chased down a modest 134-run target with ease for their second win of the season after their pacers restricted the rivals to 133 for nine.

Samson himself played a calculative knock of 42 runs in his team's win.

"It was brilliant actually. The bowlers have been doing well in the last four-five matches - the youngsters as well as the seniors. I enjoy captaining them," said Samson at the post-match presentation ceremony.

"We could see in Morris' eyes that he wanted the competition to get big batsmen out," he said about Chris Morris, who starred with a four-wicket haul.

Samson said he does not come into the crease with a specific "mindset".

"I just love to keep enjoying my batting, but nowadays I play according to a situation and try to win games for my team."

"The batting was the letdown and we lacked a lot of intent throughout the whole innings. We were behind the game right from the get-go. Possibly, we were 40 short which is a lot in a T20 game," said the English player.

"The bowlers had too much to do. It's a stark contrast to the last game. The wicket hasn't been as good as it has been in the previous games and we couldn't overcome the challenge. It left us with a lot to do, which we couldn't do," he added.

"The clearer the mind, the easier it is. Ultimately, one guy needs to play free-flowing cricket. Two sides struggling to gain momentum in the tournament and we missed big two points," he said.