IPL 2021: Virat Kohli Praises Devdutt Padikkal Says, ' He Is One To Look Forward In Future'

Padikkal smashed an unbeaten 101 off 52 balls in an opening stand of 181 with his skipper as RCB won the game by 10 wickets. 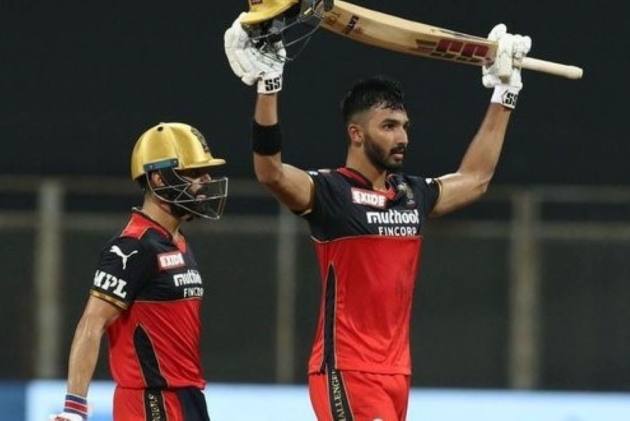 Devdutt Padikkal is a "great talent" and "one for the future", feels RCB captain Virat Kohli, who is happy that the stylish left-hander has put to rest all debates with regards to his strike-rate after his maiden IPL hundred against Rajasthan Royals here on Thursday.

Padikkal smashed an unbeaten 101 off 52 balls in an opening stand of 181 with his skipper as RCB won the game by 10 wickets.

"It was an outstanding innings. He (Devdutt) batted really well for his first season last time as well. There was a bit of a talk about accelerating after 40-50, this was the best way to put it to rest," Kohli said at the post-match presentation ceremony.

"He is a great talent, great one to look forward in the future. I had the best seat in the house," Kohli couldn't stop praising the 20-year-old Bangalorean enough.

Kohli enjoyed playing a passive role as the skipper wanted his young teammate to get a hundred.

"Tonight, my role was different and I wanted to hang in there. In the end I picked my spots, the pitch was good. We spoke about it (the 100), he (Devdutt) said finish it off. He said (there could be )many more to come, I told him 'you tell me that after you get the first one.'"

Kohli now wants Padikkal to build on this knock.

"I want him to build from here and really help the team. He deserved to get the hundred today, flawless innings."

He also praised the bowling attack for restricting Royals to 177 for nine on a placid deck.

"We don't have many stand-out names in bowlers, but we have effective bowlers. Guys who can do it day in day out. Four out of four times we've been the stand-out team in the death overs. We actually restricted 30-35 runs. Dev's innings was outstanding, but for me the bowling which was aggressive, optimistic was key."
Young Padikkal said that all he wanted to do after recovering from COVID-19 was to wait for his turn.

"To be honest it's been special, all I could do was wait my turn. When I had Covid all I wanted was to to come here and play, and when I missed the first one (game), it really hurt me," Padikkal said.

He said he didn't think about the hundred as he was okay had skipper Kohli scored the winning runs before he completed his three-figure mark.

"The ball was coming on really well, and when we get into a partnership like that it gets easier. No real tension when the hundred came, I told Virat to go for it. At the end of the day even if I didn't get a hundred it wouldn't have mattered to me if the team won."
Royals skipper Sanju Samson feels that the team needs to go back to the drawing board after their third defeat in four games.

"We need to do some homework and need an honest review about our batting.That's what this sport is all about, we keep on failing and we keep on coming about. It puts you down but you have to keep on fighting," Samson said.