The UAE leg of IPL 2021 started in Dubai on September 19 with MI clashing vs CSK in Dubai. Historical data suggests IPL 2021 is all but over for Sunrisers Hyderabad. 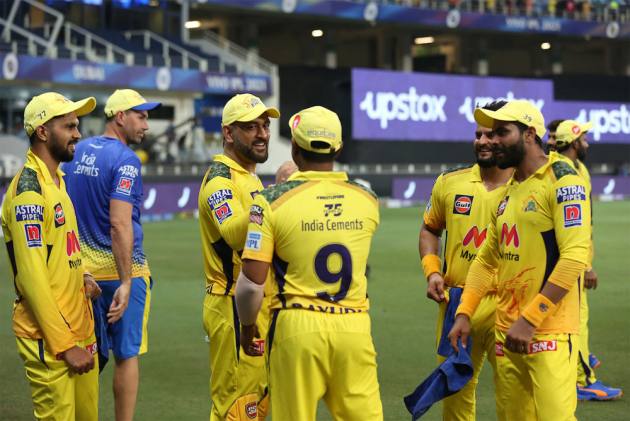 Monday night’s nine-wicket win against Royal Challengers Bangalore gave Eoin Morgan’s Kolkata Knight Riders a big boost in their IPL 2021 campaign, the second leg of which began in the UAE on September 19 after the COVID pandemic halted the tournament in India in May this year. Former champions KKR, who were languishing in the IPL points at the seventh spot, climbed to fifth after the big win against RCB and will now back themselves for a spot in the last four (playoffs). (POINTS TABLE)

Until Monday’s game, KKR had lost five of their first seven matches while RCB, who have never won the IPK under their talismanic skipper Virat Kohli, had won five of their first seven matches. Historically, IPL has seen several dramatic changes in fortunes as teams like RCB have not been able to produce the results despite having some of the biggest T20 players in their team.

KKR’s win will inspire teams like Rajasthan Royals and Punjab Kings who are in the bottom half of the table. It can also be bad news for the high-flying teams because equations can change very quickly. For example, former champions Chennai Super Kings did not qualify for the IPL 2020 playoffs in UAE. However, CSK are the favourites to win this year’s tournament. MS Dhoni’s team made a confident start with a 20-run win against defending champions Mumbai Indians on Sunday.

The IPL has always been a statistician’s delight. There are always so many probabilities and analysis of data from the past six editions show some exciting results. It is possible to identify the teams that will make the playoffs and even pick individual players who will qualify for the Orange Cap (Orange Cap) and Purple Cap (best bowler). 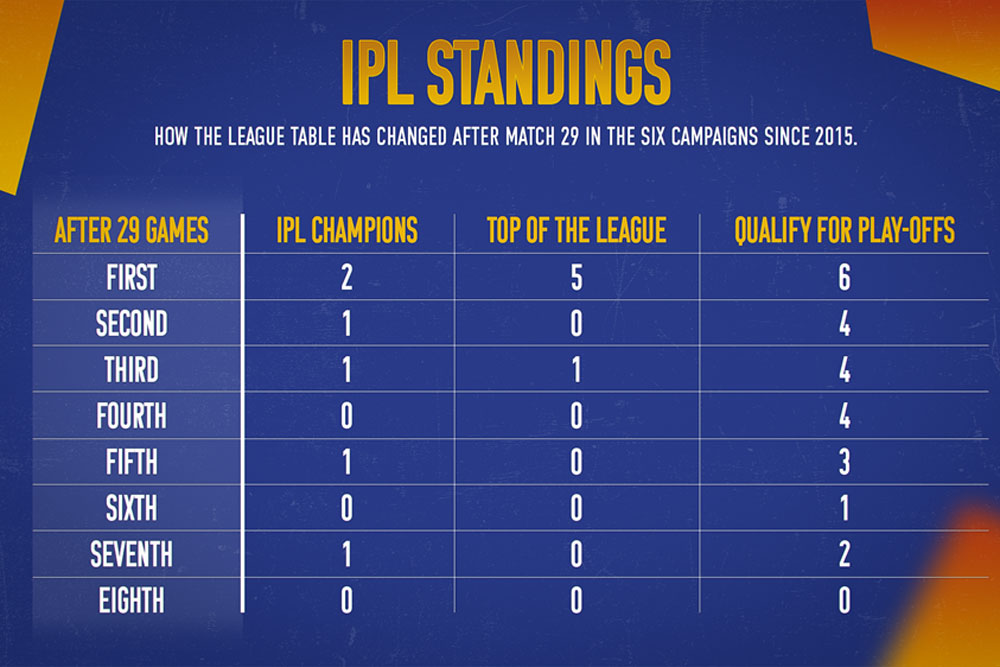 Based on this data, only one team will not make the playoffs and therefore, can’t win the tournament this year. In the last six years, the eighth-placed side after 29 matches has never managed to finish the league stage in the top four, so Sunrisers Hyderabad look done and dusted in this year’s competition. For everybody else, the tournament is alive and kicking.

Although sitting seventh and above keeps you in contention, it’s clearly preferable to be at the top of the league at this stage.

In the last six campaigns, the side leading the way after match 29 has never failed to qualify for the top four, has gone on to finish top of the league five times and has won the tournament twice – more than any other position.

Delhi Capitals, who lead the way in 2021, should therefore be certainties to qualify for the knock-out stages.

Though teams filling up the rest of the top four are in a good position – teams in each position have qualified in four of the six tournaments since 2015 – they are also vulnerable.

Only once in those six campaigns have the teams filling the top four spots at this stage been the same teams in the top four by the end of the league fixtures.

That means that in the 2021 tournament, one of Chennai Super Kings, Royal Challengers Bangalore and Mumbai Indians are likely to drop out.

With Sunrisers out of the reckoning, at least one of Rajasthan Royals, Punjab Kings and Kolkata Knight Riders should qualify. 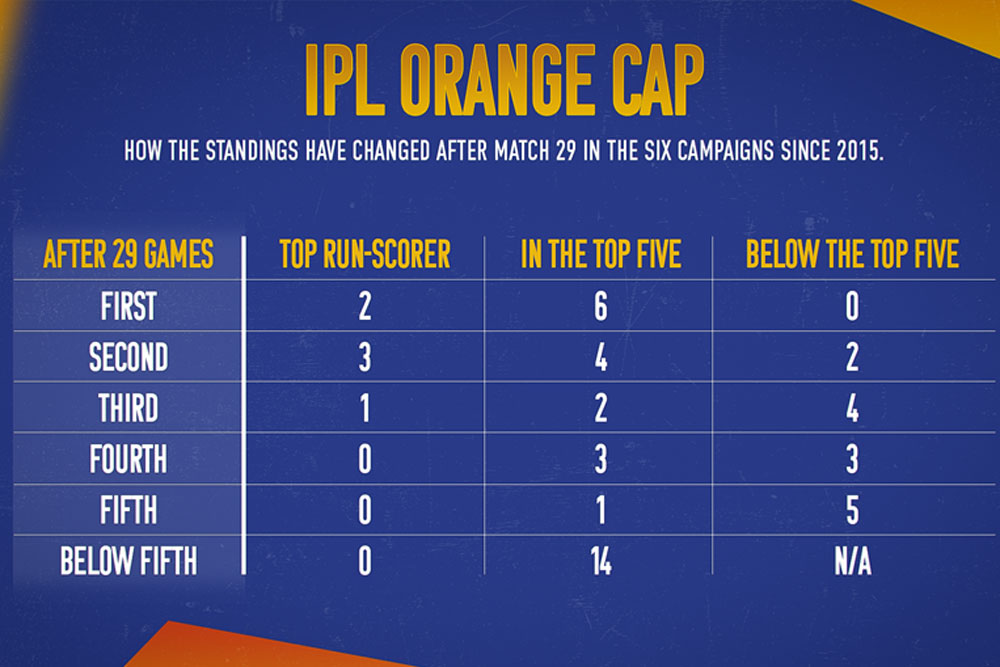 It is also possible to identify the best batsmen in IPL. Only players inside the top three run-scorers at this stage of the competition have scooped the prize.

That leaves just three players in the running for this year’s award: Shikhar Dhawan, KL Rahul and Faf du Plessis.

Three of the last six players who were second at this stage have gone on to top the standings by the end of the competition, meaning that it is advantage KL Rahul (Punjab Kings), but all three batsmen are capable of doing it. 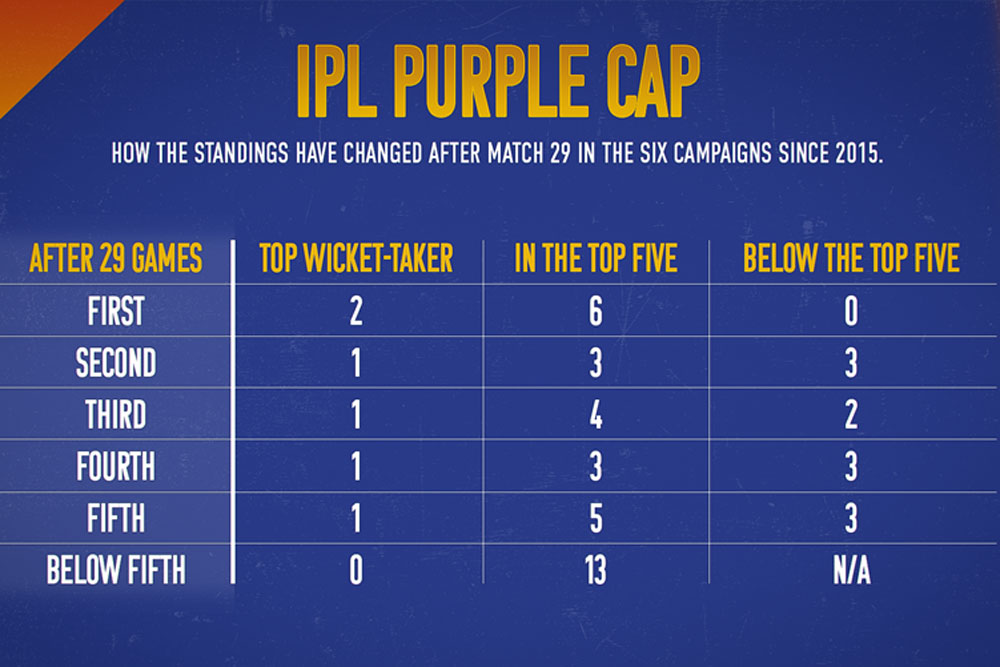 The race to the Purple Cap is a little more open. IPL has always been a batsman’s game but with teams barely been able to score big runs in UAE, bowlers have dominated in the first two games so far.

While previous winners have been second, third, fourth and fifth at this stage, the player at the top of the table has gone on to win the award twice.

Like in the race for the Orange Cap, no player to top the standings after match 29 has ever fallen out of the top five completely, so Patel is a certainty to be in the picture come the end of the tournament.