Punjab Kings, who tend to snatch defeat from the jaws of victory, beat Kolkata Knight Riders by five wickets to keep their IPL 2021 playoff hopes alive. 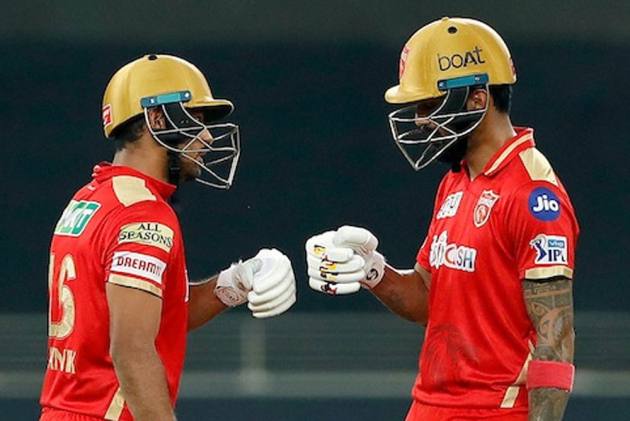 Punjab Kings skipper K L Rahul says his team can make the IPL play-offs consistently if it learns to handle pressure better and not lose games from commanding positions.

Punjab Kings, who tend to snatch defeat from jaws of victory, beat Kolkata Knight Riders in Dubai, UAE on Friday to keep their play-off hopes alive.

"I'll take the two points," said Rahul at the post-match presentation when asked about his side being part of another tense finishes.

KKR made 165 for seven and Punjab got home with three balls to spare.

"We played it smartly. Realised it was a decent wicket and can't experiment too much. We went slightly defensive with the ball. There wasn't much spin and wanted to make the batters hit to the bigger side.

"With the bat also we've given clear roles to the players. Obviously we want to finish games. The win will give us confidence and hopefully we'll build on it," said Rahul who scored a match-winning 67.

Rahul had to leave out spinner Harpreet Brar who has done well for the team.

"These are things that kill me as a captain. Don't want to leave out the Indian boys. With a heavy heart had to leave Harpreet out. Had to see what would be our best XI with Chris (Gayle) leaving the bubble."

He also praised Shahrukh Khan who finished the game for Punjab.

"Shahrukh has been batting brilliantly in the nets. Saw how strong he is in the first phase. He's asking a lot of questions and wanting to finish games.

"Today he played proper cricket shots, got a few boundaries and we all know he can hit the ball a long way. He can finish games, has done it for Tamil Nadu."

"If we can handle pressure, we will be among the top teams," he added.

"Initially we didn't field that well, we put catches down, myself early and other guys. It has cost us. When the game gets that tight towards the end, extra few wickets down would have helped us. Equally I thought we fought hard, batted really well and probably had a par score."

Talking about Rahul Tripathi's catch of the Punjab skipper in the 19th over not being adjudged clean by the third unpire, Morgan said: "I thought in real time it was out."

"Obviously when you slow things down and analyse it.. that the third umpire thought otherwise and his decision is made, that's final and we need to get on with it.

"But it would have been nice if we had got that wicket. I think everyone that went out there found it difficult to get going initially, it was not an easy wicket to start on. But after having a strong 13-14 overs we didn't capitalize on that platform."

Opener Venkatesh Iyer was among the runs again and has been the find of the season for KKR.

"He's a real find for us, has been with us the whole campaign and we have watched him in practice.. above all his attitude is fantastic for a guy that plays fearlessly as he does with the bat.

"He takes a lot of responsibility with the ball, Dre Russ leaves a huge gap in the all-rounder position for us but to have someone come in and contribute is really outstanding.

"We have played some great cricket in the second half and have some positives to take away from tonight as well. Two more games to go, we will fight hard and hopefully get a couple of good results and be in the Play-offs," he added.