King's XI Punjab's Chris Gayle became the first man to pummel a thousand T20 sixes but his 99 went in vain against Rajasthan Royals in a crucial IPL clash in UAE. 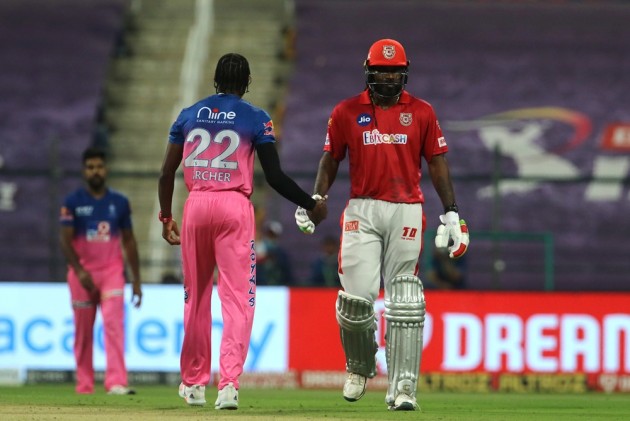 It was a bitter-sweet day for West Indian great Chris Gayle on Friday. The Jamaican, who calls himself the 'Universe Boss', scored a chancy 99 for Kings XI Punjab but ultimately saw Rajasthan Royals snap KXIP's five-match winning streak in Abu Dhabi on Friday. (HIGHLIGHTS)

Gayle, who has been instrumental in reviving King's XI Punjab's campaign in IPL 2020, was fined 10 per cent of his match fee by the IPL officials for throwing his bat after England pacer Jofra Archer dismissed him one short of a century.

The normally unflappable Gayle flung his bat in a rage after he dragged an Archer delivery onto his stumps. Gayle was in rollicking mood on Friday and his 99 off 63 balls was the cornerstone of KXIP's 185 for four wickets against Rajasthan Royals. (POINTS TABLE | FIXTURES & RESULTS) 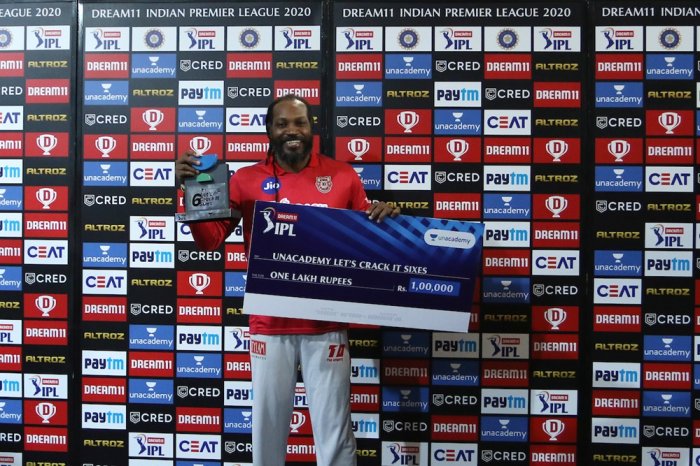 Gayle's innings was decorated with six fours and eight sixes! One of those sixes took the left-handed entertainer past a 1000 sixes in T20 cricket.

The 41-year-old Gayle smashed his 1,001st six off Archer in the final over of Kings XI Punjab innings but missed out on a 23rd T20 hundred.

The Jamaican's total of T20 sixes is over 300 more than second-placed Kieron Pollard, who has hit 690 sixes to date and over 500 more than third-place Brendon McCullum, who has struck 485. Pollard plays for Mumbai Indians while McCullum is the head coach of Kolkata Knight Riders. Chris Gayle has over a 1000 T20 sixes in T20 cricket. He was in belligerent mood in Abu Dhabi on Friday. Photo: BCCI

TITLE DREAM
Speaking after his innings, Gayle - who has three half-centuries in six IPL innings this season, said: "To the guys I promised a century, I missed out, but in my mind, it's a century! It was a good knock.
"Getting out on 99 was unfortunate. I have been there and done that already but these things happen.
"I have to give thanks that I am still hitting it well at the age of 41. I think the dedication and hard work has paid off over the years
"I am still feeling good. It's all about the mental aspect of my game, I think that's what's keeping me going.
"I am still enjoying my cricket the same way and I still want to do well. I'd love an IPL trophy under my belt."
In the final week before the playoffs, it's a mad rush for the top four slots. Only Mumbai Indians are guaranteed of a place and apart from Chennai Super Kings, six teams are in the running for three available slots.