Indian Premier League, world's most popular T20 cricket league, has had its fair share of controversies involving some of the most prominent names like Virat Kohli, Gautam Gambhir, Sourav Ganguly, Lalit Modi, etc 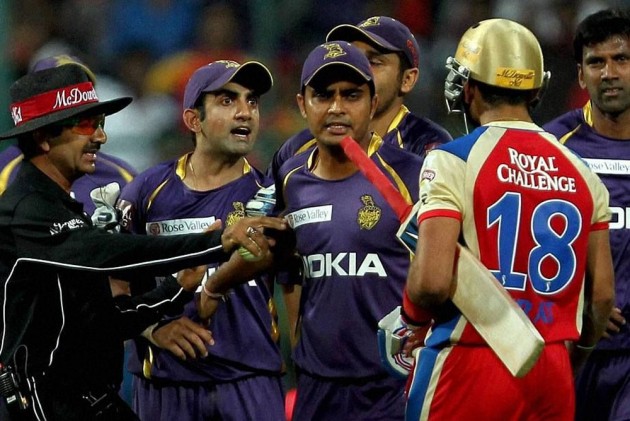 A reluctant India won the inaugural edition of ICC World T20 and the following year witnessed the birth of Indian Premier League (IPL), a money spinner for the Board of Control for Cricket in India (BCCI) which has now become probably the de facto 'festival of cricket'. On April 18 in 2008, the world got the first glimpse franchise-based T20 cricket. It now becomes a tradition of every cricket playing nation to have its own T20 league.

But the world's most popular cricket league has had its fair of share controversies. Who can forget a crying S Sreesanth and Kieron Pollard taking the field with tape on his mouth, Virat Kohli and Gautam Gambhir involved in a heated argument, etc. Then there were numerous off the field controversies too. The spot-fixing, ban of Lalit Modi, cheerleader revelations, etc.

And the 2018 season, which is only in its second week, has so far witnessed at least two big controversies – that of R Ashwin 'mankading' Jos Buttler and umpiring fiasco during  Royal Challengers Bangalore (RCB)-Mumbai Indians (MI) match.

Here we look at some of the biggest controversies which have marred the cash-rich tournament in the past:

It took just 12 days into the first season for the IPL to have its first brush with controversy and leave a never fading 'crying' image. MI captain Harbhajan Singh reportedly slapped then KXIP pacer S Sreesanth in Mohali. Sreesanth was later seen crying bitterly on the ground even as Harbhajan was banned from taking further part in the season.

The second season also witnessed the controversial seven-and-a-half-minute television timeout, only to be revised the following year.

Lalit Modi, the first chairman of IPL, was ousted minutes after the final of the third edition for financial irregularities. He was accused of shady bids involving RR and KXIP and a suspected broadcast deal with Sony. Chirayu Amin was subsequently appointed as the new chairman.

Then, there was also the controversy surrounding the appearance of a cricket blog (Fake IPL Player), started anonymously by Anupam Mukerjee. It became infamous for giving nicknames to players, coaches, and owners of Kolkata Knight Riders (KKR) and other teams, and for portraying most of them in a negative light.

Shashi Tharoor, then a minister in the Manmohan Singh government, was forced to resign after the revelations that his then-girlfriend Sunanda Pushkar was given a stake in the newly constituted franchise, Kochi Tuskers.

MI threw out South African cheerleader Gabriella Pasqualotto for blogging on how cheerleaders were treated poorly and cricketers misbehaved with the girls.

One year after dropping Sourav Ganguly as the captain of KKR, the Shah Rukh Khan-owned franchise didn't retain the India captain. Pune Warriors India subsequently named Ganguly as the replacement for the injured Ashish Nehra.

And rumours of some of the franchisees indulging in 'criminal activities' started to emerge.

After his altercation with the security guards at the Wankhede Stadium, Shah Rukh Khan was banned by the Mumbai Cricket Association for five years and denied entry into the stadium.

Aussie Luke Pomersbach was arrested over molestation charge for after a US woman filed a case against the RCB player.

Andrew Flintoff, then one of the world's best all-rounders, was a hot target for a majority of the franchises but was sold to Chennai Super Kings (CSK). Later, Modi claimed that S Srinivasan blocked RR to bid for Flintoff.

This is the most infamous of the lot and the events that unfolded during the sixth season would change the face of cricket in India. Sreesanth, Ajit Chandila and Ankeet Chavan were arrested by the Delhi Police for their involvement in fixing matches. CSK team principal Gurunath Meiyappan was also implicated in the controversy. As a result, the Supreme Court constituted the Mudgal panel, then the Lodha panel. And today, cricket in India is governed by Committee of Administrator (CoA), not by BCCI.

Virat Kohli and Gautam Gambhir involved in an ugly altercation, charging at each other, during the 12th match of the season. What was the real cause of the fight is still unknown, but the footages and images of that incident have earned notoriety, showing the sheer of self-control and sportsmanship. Of course, the two Delhi players are one of the most animated cricketers.

Preity Zinta and Ness Wadia – co-owners of KXIP – have officially announced the split in 2013, then things went out of control in 2014. During a game at the Wankhede Stadium, Wadia allegedly threatened her with dire consequences and also abused reportedly her in front of others.

Kieron Pollard and Mitchell Starc were fined for their heated altercation during the MI-RCB match at the Wankhede Stadium. The incident happened in the 17th over of MI innings soon after Starc bowled a bouncer to Pollard. The MI all-rounder responded by swinging his bat.

As per the anti-corruption rules of the BCCI, players aren't allowed to speak to outsiders during a game. But Kohli and Yuvraj Singh were seen breaking the guidelines by engaging in a
conversation Anushka Sharma during RCB's match against Delhi Daredevils at the M Chinnaswamy Stadium in Bengaluru.

The Lodha panel suspended India Cements and Jaipur IPL, the owners of the CSK and RR teams, for a period of two years, which automatically barred the two franchises from the league for the said period.

Pollard put tape on his mouth when he was asked by the umpire to not talk too much during an RCB-MI match. The all-rounder was trying to get under Chris Gayle's skin.

With Maharashtra reeling under severe drought, scheduled IPL matches in the western state were ordered to move to other venues.

The season witnessed many on-field fights and also a reported team brawl in the KXIP camp, which the franchise termed as the best fiction story of the year.

Pollard (MI) and his Windies team-mate Dwayne Bravo (Gujarat Lions), representing different franchises, found themselves taking out at each other during a GL-MI match. Then there was Praveen Kumar(Lions)-David Warner (SunRisers Hyderabad) tussle during the second Qualifier. In another fight, MI team-mates Harbhajan and Ambati Rayudu showed their ugly sides during a Rising Pune Supergiants and Mumbai match in Pune.

Celebrated commentator, Harsha Bogle's contract was terminated by the BCCI ostensibly for his unbiased commentary.

Harsh Goenka, brother of Sanjiv Goenka, the owner of Pune criticised MS Dhoni and compared the India captain with Steve Smith. The Aussie was installed as the captain of the team, replacing Dhoni, for the season.

Former Indian batsman and commentator Sanjay Manjrekar had said that Pollard had no brains. Pollard hit back by saying, Manjrekar suffers from Verbal diarrhea.

In a Mumbai-Bengaluru match, Hardik Pandya was given not out by the third umpire despite clear murmur on UltraEdge for a nick. Another umpiring howler happened during a Hyderabad-Chennai match with the on-field umpire ruling a beamer from Shardul Thakur to Kane Williamson as a legal delivery. The gravity of that mistake can only be felt after the match, which Hyderabad lost by four runs.

Then, there was a rumoured tiff between Zinta and KXIP mentor Virender Sehwag, which refused to die its own death. The incident reportedly happened after KXIP's defeat to RR.

But the biggest controversy of the season involved the broadcasters. In an MI vs RCB match, Jasprit Bumrah dismissed Umesh Yadav, and the replays showed the bowler's front foot clearly on the line. But it turned out that the footage used to review the dismissal was a different one, with Yadav on the non-striker's end.