In a social media post, Irfan Pathan wrote to Leander Paes: 'It was a short yet memorable partnership brother' 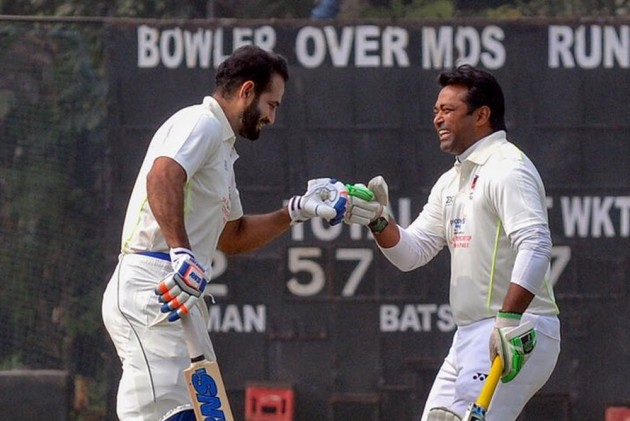 Dr. Paes, 75, was a member of the bronze medal-winning Indian hockey team in the 1972 Munich Olympics. During his heydays, Paes Sr was equally proficient in cricket, football and other sports.

The Doctors’ XI, for whom Paes Jr and Pathan turned out, lost to CC & FC by three wickets. A day after the match, Pathan shared a social media post, with a message to tennis legend, which read: "It was a short yet memorable partnership brother".

‘‘Our plan is to host the Dr. Vece Paes Cricket Cup on India’s Republic Day every year. It gives us an opportunity to do something in honour of Dr Paes,’’ Gulf News quoted Dr. Manoj Khanna, a hair transplant specialist and the main organiser, as saying.

Paes Sr had served as a medical consultant with various sports bodies, including the Board of Control for Cricket in India (BCCI), Asian Cricket Council and the Indian Davis Cup tennis team. He also worked as a consultant doctor to IMG Reliance for the ATP tournament in India and the Indian Super League.

Meanwhile, Paes Jr, who skipped the Australian Open, is eyeing a French Open comeback in his quest to make a record eighth appearance at the Olympics in Tokyo.

"I hope that by the time of French Open, by the end of May, Europe will get to a better position than now," the Olympic bronze medallist in singles and multiple-time doubles Grand Slam winners said while speaking during the launch of the cricket tournament named after his father.

"It's my goal to represent India in eighth successive Olympics. I'm keeping myself in good physical and mental fitness which is not easy being away for 11 months.

"I've been practising hard, putting in three hours everyday and I'm in the last 100m sprint of a long career. Tokyo Olympics is important to make sure India remains in the record," the 47-year-old added.