Though Kerala Blasters battled valiantly, Sunil Chhetri scored the winner with a brilliant header in the 55th minute to preserve Bengaluru FC's unbeaten record in the Indian Super League 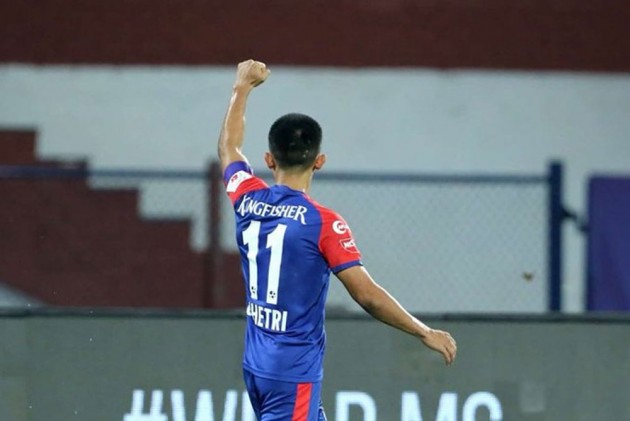 Though Kerala Blasters battled valiantly, Chhetri scored the winner with a brilliant header in the 55th minute to preserve his side's unbeaten record in the ISL.

The win saw the Blues climb up to second on the table with nine points from five games while Kerala Blasters, winless after the opening match, are at seventh.

The away side showed plenty of intent right from the start, pressing Bengaluru hard and forcing mistakes from the reigning champions.

The first chance did fall for Kerala Blasters when Sergio Cidoncha picked out Rahul KP at the far post with a lovely cross. However, the youngster mistimed his header and the chance went abegging.

An energetic Kerala Blasters continued to dictate terms and should have taken the lead six minutes later. Bartholomew Ogbeche fed Raphael Messi Bouli into the box. He tried to return the favour, but a sliding Ogbeche just could not get there.

Bengaluru, after a slow start, started to get more on the ball and create chances. They thought they had the lead in the 28th minute when Harmanjot Khabra played Udanta Kumam free down the right wing. The winger's cross from the byline was headed in by Raphael Augusto, but the linesman deemed the ball to have gone over the line before Udanta got the cross in.

An unfazed Kerala continued to ask questions of the Bengaluru defence. But there were nervous moments for the away side in defence too. Albert Serran headed over from point-blank range after Augusto pulled back a ball from the byline in the 36th minute.

Six minutes later, Messi Bouli wriggled clear of Albert Serran to latch on to a long goal kick from Rehenesh TP, finding himself one-on-one with Bengaluru custodian Gurpreet Singh Sandhu. But the Cameroonian blazed over, much to the disappointment of the away side fans.

Bengaluru finished an action-packed half with Chhetri hitting the side-netting from close range seconds before the whistle. The Indian captain, however, was not to be denied 10 minutes after the re-start.

Nobody picked out Chhetri from a Dimas Delgado corner as he placed a diving header expertly into the bottom corner to send the home crowd into raptures.

That goal broke Kerala Blasters' rhythm as Bengaluru started creating chances galore. They should have scored a second within three minutes of Chhetri's goal when Rehenesh gave away the ball cheaply inside his own box. Dimas received the ball and took a shot at goal, but Raju Gaikwad blocked it heroically.

Eelco Schattorie sent in Sahal Abdul Samad to change things around and Kerala did have a great chance to equalise. Messi dispossessed Serran and picked out Rahul who sidestepped Nishu Kumar's challenge, but dragged a left-footed effort just wide.

But the home side continued to find space behind the Kerala defence. Udanta surged past Jessel Carneiro in the 73rd minute and picked out Augusto with a cut-back but the latter's first-time shot was brilliantly saved by Rehenesh to keep Kerala in the game.

Bengaluru, however, saw off the rest of the game with ease to claim full three points.