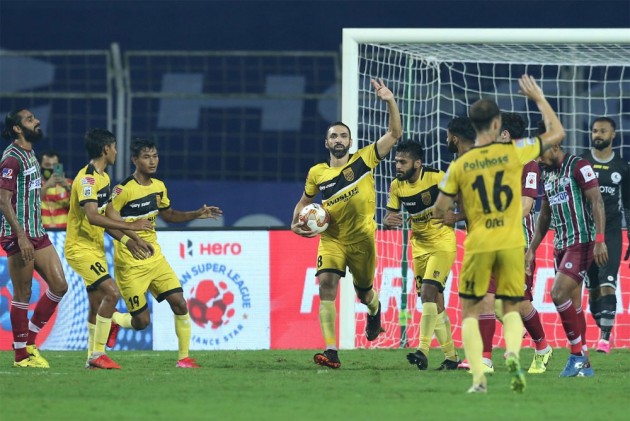 Manvir Singh (54’) had put ATKMB in the driving seat before they succumbed to yet another set-piece as Joao Victor (65') made it all square from the spot. All three goals ATKMB have conceded so far in the league are from set-pieces

With coach Manuel Marquez suspended following a red against Jamshedpur FC, assistant coach Thangboi Singto made three changes. Subrata Paul was back in goal. Souvik Chakrabarti and Nikhil Poojary were the other two faces to start.

Antonio Habas made two changes to the ATKMB XI that lost to Jamshedpur FC with Sumit Rathi and Manvir Singh starting the game.

ATKMB’s Roy Krishna and the Nizams’ Subrata Paul were outstanding in the first half with the duo at their best in their respective departments. While Krishna created chances and nearly scored his fifth goal of the season, former India keeper Paul displayed his class and made his experience count, keeping his side in the game with some brilliant saves.

ATKMB had their first shot on target as early as in the 7th minute, but Krishna's low effort didn't trouble Hyderabad's keeper. Minutes later, the Fijian almost put his side ahead when he leapt highest to meet a Pritam Kotal cross, but his glancing header was kept out of the frame by Paul.

Yet another chance went begging for ATKMB when Edu Garcia's free-kick found Krishna in the attacking third. He made a perfect run and got the ball on his stronger right foot, only to see his low shot go wide.

Paul was in the thick of action throughout the first half. He denied Prabir Das with a diving save and later came with a double stop to deny Krishna and Edu Garcia.

ATKBM did not wait too long in the second half to take the lead. Manvir Singh took on the entire Hyderabad FC defence and smashed the ball into the roof of the net, less than ten minutes after the restart.

Arindam Bhattacharja nearly gifted HFC the equaliser when he fumbled in dealing with Liston Colaco's cross but recovered well to keep the ball from entering the goal.

However, ATKMB's lead lasted just over ten minutes. Manvir went from hero to villain when he brought down Poojary in the box, forcing the referee to point towards the spot. Joao Victor kept his cool to score the equaliser.