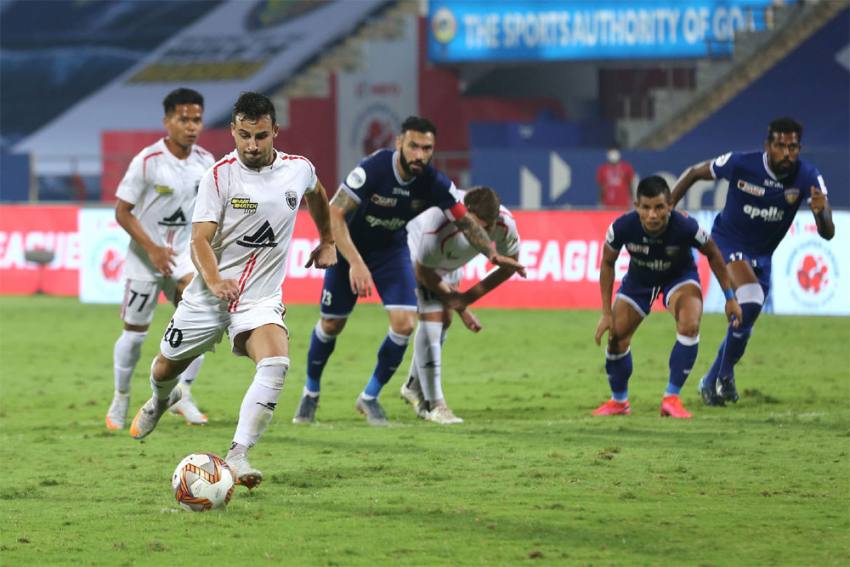 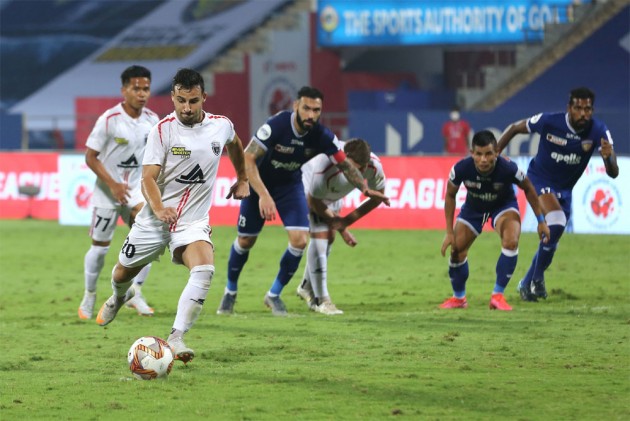 The race for the Indian Super League (ISL) 2020-21 playoffs took another twist as NorthEast United FC were held to a thrilling 3-3 draw by Chennaiyin FC at the GMC Stadium, Bambolim, on Thursday. (More Football News)

Three teams – Hyderabad FC, FC Goa and NorthEast — are tied on 27 points from 18 games, intensifying the race for the last two playoff spots.

When it looked like Chennaiyin would inflict a first defeat on Khalid Jamil this season, Luis Machado scored a stoppage-time equaliser to extend their unbeaten run to seven games. Chennaiyin were in the lead through goals from Lallianzuala Chhangte (8', 52') and Manuel Lanzarote (50') while Imran Khan (14') and Deshorn Brown (43') had replied for NorthEast.

Csaba Laszlo had made his intent to attack clear during the pre-match press conference and his side delivered early in the game with an eighth-minute lead.

After a miserable season in front of the goal, Chhangte finally found his scoring boots as he put his side ahead. Jakub Sylvestr picked up Chhangte with an accurate pass from the left and the latter took a touch before firing past Subhasish Roy.

However, it took the Highlanders just six minutes to get back into the game. Luis Machado played a low cross which took a deflection and fell to Imran Khan, who headed in.

Chennaiyin were rescued by Kaith’s brilliance when he came up with a double save to deny Machado and Brown from close in quick succession.

At the other end, NorthEast United had the framework to thank. Roy fumbled Manuel Lanzarote’s freekick from outside the box, but the ball deflected off his back and hit the post, before being cleared away.

The Highlanders finally took the lead from a quick counter. Chhangte lost possession outside the NorthEast box and Khassa Camara played a long ball which found Brown. He won the battle against Enes Sipovic before slamming the ball into the back of the net.

The Highlanders nearly doubled their lead soon after the restart. Machado delivered a perfect free-kick into the six-yard area which was met by Suhair Vadakkepeedika, but Kaith produced yet another save.

At the other end, Chennaiyin won a penalty when Ashutosh Mehta brought down Chhangte inside the box forcing the referee to point towards the spot. Lanzarote sent the keeper the wrong way to restore parity.

Chhangte then scored his second and put Chennaiyin ahead again. Edwin Vanspaul found Chhangte outside the box. His effort took a deflection off Benjamin Lambot before entering the goal.

NorthEast kept pressing for the equaliser but were denied by Kaith’s brilliance. However, Chennaiyin’s hero soon turned villain, giving away a penalty in stoppage time when he brought down Idrissa Sylla in the box. Machado kept his composure to convert the spot-kick.