ATK Mohun Bagan produced a clinical display in the Kolkata derby to beat East Bengal 3-0. The win helped Antonio Habas' men jump to the top of the ISL 2021-22 table with six points from two matches. 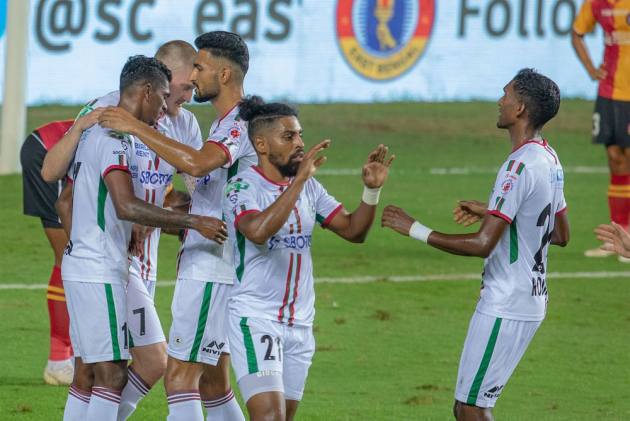 The 380th edition of the century-old rivalry started with East Bengal in a sprightly mood at Tilak Maidan, Vasco in Goa. They created a couple of early chances, but Roy Krishna changed the course of the match in the 12th minute with a fine finish from a Pritam Kotal delivery.

The Fijian striker thus scored in the third successive Kolkata derby even as ATK Mohun Bagan made it 3-0 in the head-to-head record since East Bengal joined the ISL bandwagon.

Manvir Singh doubled the lead in the 14th with another fine touch, this time with Joni Kauko playing the role of a feeder after a brilliant team move.

Liston Colaco effectively killed the derby in the 23rd minute with the third. The goal, however, came from a mistake from Arindam Bhattacharya.

It was a forgettable outing for the veteran goal-keeper who left Mohun Bagan to join East Bengal before the start of the season. Tempted by a long ball, he lost the one-on-one fight against Colaco and watched the former Hyderabad FC player slot home from a tight angle.

ATKMB's Finnish recruit Joni Kauko conducted the show in the middle with ever-busy Subhasish Bose and Pritam Kotal running amok on the flanks. And East Bengal didn't have a reply despite seemingly enjoying greater possession.

But ATKMB, as usual, gave little importance to ball possession and were more busy creating more meaningful moves, at times resorting to long balls. In fact, the goal was a result of such a play.

Habas fielded the same XI which started against Kerala Blasters in the season opener, while Diaz handed East Bengal debuts to Darren Sidoel.

By the time Manolo Diaz made changes in East Bengal personnel to mount a fightback, it was too late.

Antonio Perosevic's performance, however, was the lone bright spot for East Bengal. Such was their helplessness against a well-drilled side that the Croatian even lost his cool towards the end, and was booked for kicking the ball away in frustration after yet another failed move.

Habas' men have scored seven goals in two matches and they look the side to beat this season. With two wins from two, ATK Mohun Bagan jumped to the top of the table, two points clear of Jamshedpur FC.

They next play Mumbai City on December 1 in a replay of the last season's final. East Bengal take on Odisha FC on November 30.