After trailing 0-1 in the fourth minute, Bengaluru FC scored four goals through four different scorers to win a six-goal thriller against fellow former champions Chennaiyin FC in their ISL 2021-22 match. 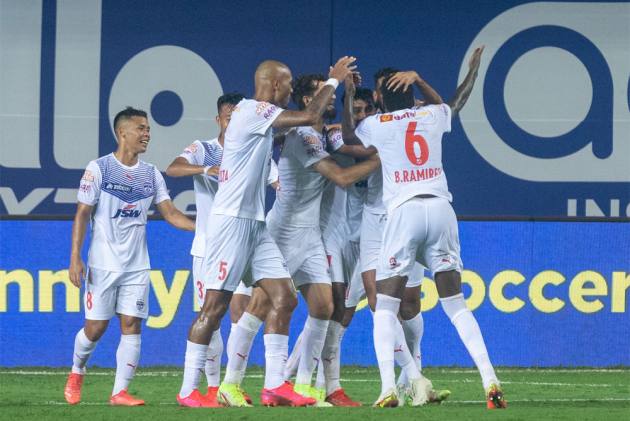 Inspired substitutions from Bengaluru FC head coach Marco Pezzaiuoli did the trick as his side ran out 4-2 winners over Chennaiyin FC in the Indian Super League in Vasco, Goa on Thursday. (More Football News)

Mirlan Murzaev's fourth minute strike gave the hosts the lead before strikes from Cleiton Silva and Alan Costa gave Bengaluru the advantage heading into the break.

The second half played out in similar fashion, with a Rahim Ali strike restoring parity for Chennaiyin, only for Udanta Singh and Pratik Chaudhari to score off the bench.

Earlier, Bengaluru started with Ashique Kuruniyan, Cleiton Silva and Prince Ibara in atack, as Sunil Chhetri took his place on the bench for the third successive game.

In defence, Pezzaiuoli handed starts to Parag Shrivas and Ajith Kumar, while Naorem Roshan Singh returned from suspension to take his place at left-back.

Despite what looked like a promising start, Bengaluru were pegged back in only the fourth minute when Kyrgyzstani Murzaev broke free of the backline and slipped through on goal. The Chennaiyin winger cut in on his right and slotted home past Gurpreet to give his side an early lead.

Bengaluru had chances of their own through Silva and Ibara, but the duo were denied by Vishal Kaith.

Pezzaiuoli rang in an early change as Udanta replaced Ajith just shy of the half hour mark.

Bengaluru found themselves with an opportunity to equalise just moments later when Ashique's cross deflected off the arm of Jerry Lalrinzuala, prompting the referee Rahul Kumar Gupta to point to the spot. Silva then sent Kaith the wrong way to level things up.

The Brazilian then turned provider just minutes shy of the break, as his corner fell to Costa for the Blues' defender to deflect goalward and past Kaith to give the Blues the lead.

Bengaluru took their advantage down the tunnel, but it didn't last long after the restart when a mix up at the back allowed Rahim Ali to score with an effort that was scuffed into goal.

Pezzaiuoli rang in three changes past the hour mark as Ibara, Ashique and Jayesh Rane were withdrawn to be replaced by Pratik Chaudhari, Chhetri and Danish Farooq. Bozidar Bandovic made a change of his own as Lallianzuala Chhangte replaced Rahim Ali.

The Blues reclaimed their lead with a slick move down the flank that had three of their substitutes involved.

After Chhetri found Danish in attack, the midfielder's pass for Cleiton was left by the Brazilian for Udanta to drive home. Soon after, another substitute found himself on the scoresheet as Kaith spilled Roshan's corner allowing Bruno to nod down for Pratik to score on the bounce.

Bengaluru pushed forward in a bid to add a fifth to the board, but Chhetri's attempt on the volley was skied before Silva saw his effort saved by Kaith. However, it mattered little as the Blues ran away with the win, their first in eight games.

Bengaluru next face SC East Bengal in their first encounter of 2022, at the GMC Athletic Stadium, in Bambolim, on January 4.