Languishing at 10th place, Bengaluru FC started the season with a win, but since then haven't managed to muster a single victory, pocketing just six points from eight outings. Chennaiyin FC are sixth with 11 points from seven matches. 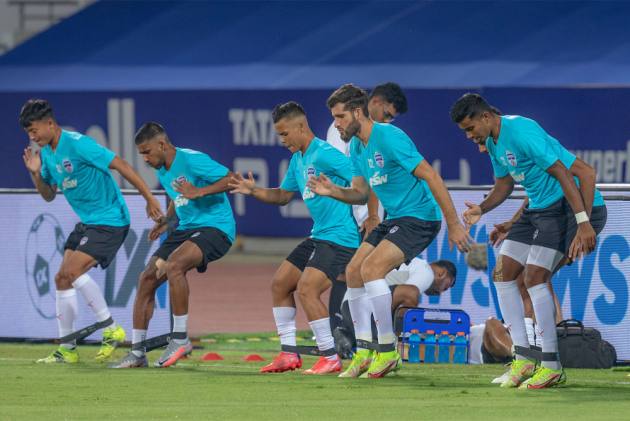 Former champions Chennaiyin FC would look to recover from a heavy defeat and get back to winning ways when they take on struggling Bengaluru FC in an Indian Super League match in Vasco, Goa on Thursday. (More Football News)

Chennaiyin defence was put to the sword by high-flying Kerala Blasters who ran out 3-0 winners, leaving Bozidar Bandovic's wards sixth in the table with 11 points from seven matches.

In Bengaluru FC, Chennaiyin will know they have an opponent who are not very high on confidence after remaining winless in their last seven games.

Languishing at 10th place, the Blues got off to a winning start this season but since then haven't managed to muster a single victory, pocketing just six points from eight outings. They played out a dour 0-0 draw in their last game, showing the lack of creativity in the final third.

The Marco Pezzaouli-coached team kept a clean sheet in the last game but in general lacked spark, which has been their bane for quite some time now. Skipper Sunil Chhetri hasn't been at his best, forcing the coach to relegate him on the bench.

"Sunil is very professional, he works very hard and I see the luck is coming back in training, and it’s only a matter of time before it comes back in the games as well," Pezzaouli said on the eve of Thursday's game.

"It's not difficult for me to tell Sunil that he isn't starting. He's a professional who assesses himself, and he knows very well how to deal with these situations. He is an option for tomorrow because he has been training well."

Chennaiyin coach Bandovic stressed on the team camaraderie and said it's very important to stay together especially inside a bubble.

"The most important thing for me is that our players are okay. I am very happy with them. We are a team inside and outside the field and that is very important," Bandovic said.

"We are trying to improve every game. The players are responding well and I am very happy with them. Our atmosphere is fantastic," he added.

Chennaiyin have failed to score against Bengaluru FC in their last four games and they would surely want to reverse the trend on Thursday.

In the nine games between the two sides, Chennaiyin have won three, including the ISL final in 2017-18. Bengaluru FC have four wins while two games ended in draws.