With four draws and four defeats, East Bengal remain rooted to the bottom of the 11-team ISL league table. In contrast, Hyderabad moved to second place with 12 points from seven matches. 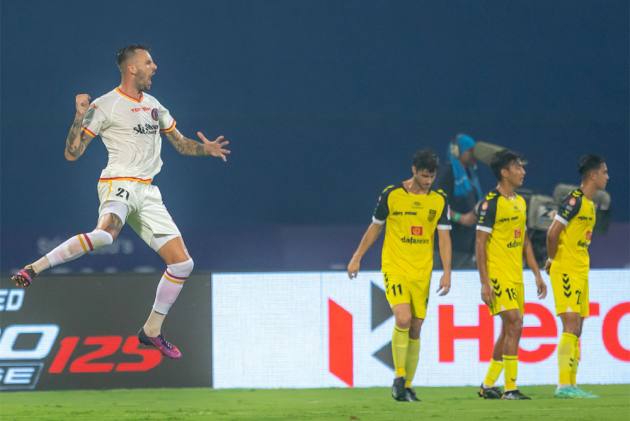 Despite taking an early lead, East Bengal played out a 1-1 draw with Hyderabad FC in their Indian Super League (ISL) 2021-22 match in Bambolim, Goa on Thursday. (More Football News)

With four draws and four defeats, East Bengal remain rooted to the bottom of the 11-team league. In contrast, Hyderabad moved to second place with 12 points from seven matches -- three wins, three draws and one defeat.

Jamshedpur, also with 12 from seven, are third on goal difference. Defending champions Mumbai City, with 15 points from seven matches, lead the table.

Amir Dervisevic (20’) opened the scoring against the run of play with a brilliant free-kick to give East Bengal the lead, but it took only fifteen minutes for Hyderabad to hit back.

Bartholomew Ogbeche (35’) scored with a header for the equaliser. The 1-1 draw at Athletic Stadium extended Hyderabad's unbeaten run to six matches.

Joel Chianese was the first to test East Bengal custodian Arindam Bhattacharja in the 12th minute after a cautious start from both teams.

However, it was East Bengal that went into the lead thanks to a powerful direct free-kick from outside the box by Dervisevic. The midfielder scored with a left-footed shot that caught Laxmikant Kattimani unaware.

Daniel Chima Chukwu missed a fabulous opportunity to double his team’s lead by sending his shot wide in a one-on-one situation just before the half-hour mark.

Post the drinks break, Hyderabad FC turned up the intensity and scored through Ogbeche. A pinpoint cross from the left flank by Aniket Jadhav found Ogbeche, who headed home with relative ease.

Minutes after the equaliser, Mohammad Rafique blasted the ball against the crossbar with a powerful shot from outside the box after latching on to a layoff by Chukwu.

Both teams went into the break on equal terms. And it remained that way, despite both the camps making changes in personnel.

East Bengal defender Raju Gaikwad made way after suffering a blow to the head earlier in the match.

At the 85th minute mark, Sahil Tavora did try a long ranger but Arindam managed to parry the ball away.

Naorem Mahesh and Juanan got a yellow card each towards the end of the match. But the match witnessed very little action and the two sides shared the spoils.

Hyderabad FC will play Odisha FC in their next at the Athletic Stadium on Tuesday. East Bengal will take a breather before taking on Bengaluru FC in the next year.