Jorge Ortiz, who was red-carded against Bengaluru, had already served his automatic one-match suspension in ISL 2021-22. FC Goa will miss the services of Ortiz against Odisha FC on Friday. 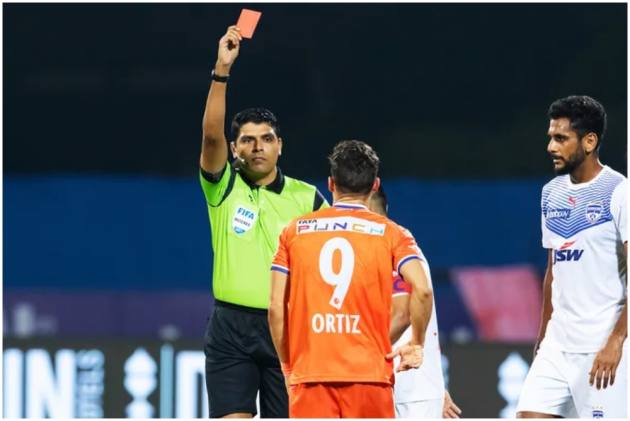 The ISL said Ortiz was found guilty of ‘committing serious misconduct’ after being charged with ‘violent conduct’ in FC Goa’s ISL game against Bengaluru FC on December 11 at Bambolim. Ortiz had pushed an opponent when the ball was not in play during that match.

“The player in his defence apologized and stated ‘there was no harm intended’ towards Bengaluru FC player Suresh Singh Wangjam, in his written reply to the Committee,” the ISL said in a media release. The AIFF body passed the verdict on Sunday after calling for an additional hearing.

A heated exchange that resulted in Jorge Ortiz being shown a straight red card and Suresh getting a yellow! ðÂÂÂ

Ortiz has already served his automatic one-match suspension as a result of his red card offence. The Spaniard will sit out FC Goa’s match against Odisha FC on Friday. He will be eligible for selection next against ATK Mohun Bagan on December 29.

ATK Mohun Bagan physiotherapist Luis Alfonso Redondo Martinez has also been fined Rs 40,000 by the Disciplinary Committee. Charged with a similar offence and called for a hearing, Martinez has been given a 'stern warning' for his actions. No additional match suspensions were imposed on him by the Committee.