Kerala Blasters lead the Indian Super League (ISL) 2021-22 table with 20 points from 11 matches. They have lost only once this season. Defending champions Mumbai City are fourth with 17 points from 11 outings. 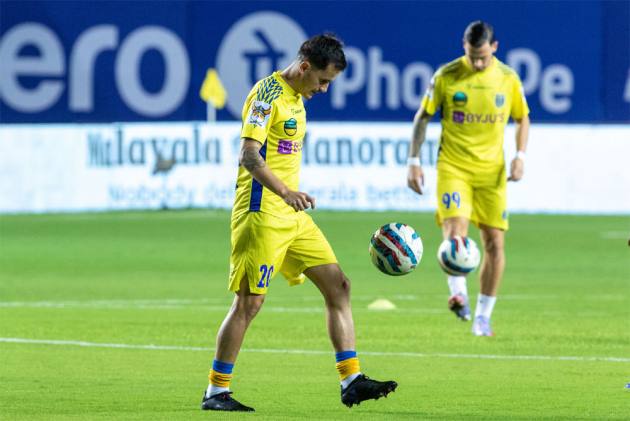 Kerala Blasters will look to consolidate their lead at the top of the Indian Super League (ISL) 2021-22 table when they take on defending champions Mumbai City FC at the Tilak Maidan Stadium, Vasco in Goa on Sunday (December 16). (More Football News)

Star Sports are the official broadcasters of the league. Fans can live stream ISL 2021-22 matches on Disney+ Hotstar and JioTV. Kerala Blasters vs Mumbai City match starts at 7:30 PM IST.

Kerala, unbeaten in 10 of their 11 games, are on a dream run. Ivan Vukomanovic's charges have looked like the best team so far in the season with their attacking arsenal steamrolling opponents. Their only defeat was against ATK Mohun Bagan, a 2-4 reverse, on November 19 last year.

Adrian Luna has been their best player by a distance. The Uruguayan has been an assist king, providing six assists in 11 matches this season and is one of the main reasons for the team's success. He now has the team's joint-most assists, along with Jessel Carneiro and Josu Prieto.

"We have realised no team will give us anything free in this league. We have to fight for that. In professional sport, the moment you think you are the best and start being arrogant, you are finished, you're history. I can understand the emotion and euphoria the fans have but we need to stay focused and fight till the end," said Vukomanovic on the eve of the tie.

In Mumbai City, they face a team that are on a five-game winless run. Mumbai's fall started with a 0-3 loss to Kerala earlier in the season. The Islanders’ longest winless streak happened in the 2015 season when they went on a seven-game run without a win.

Reigning champions Mumbai would be desperate to end their winless run. Placed fourth in the points table, Des Buckingham's side have 17 points in 11 games and a win against Kerala would bring them right on track.

Mumbai have conceded 20 goals this season, crossing their tally of 18 goals conceded in the league stage of ISL 2020-21 in just 11 matches. They have suffered because of their porous backline and Buckingham would want to address that first.

"At Mumbai City, we look at things like how it stands on the table right now - joint third and three points off the top, not just the past few games. Having said that, we can't go through the next nine games conceding the way we have. We have the same players who are working hard. I am convinced we are a short time away from a turnaround," Buckingham said.

On Kerala, he added: "I enjoy watching Kerala Blasters play. They are coached well by Ivan. Adrian Luna always impresses me."

In the 15 games between the two sides, Kerala Blasters have won thrice, including the last game. Mumbai have six wins and six games ended in draws.