The win helped Kerala Blasters move to fifth-place in the 11-team ISL 2021-22 table with nine points from six matches. Holders Mumbai City remain at the top with 15 points from seven games. 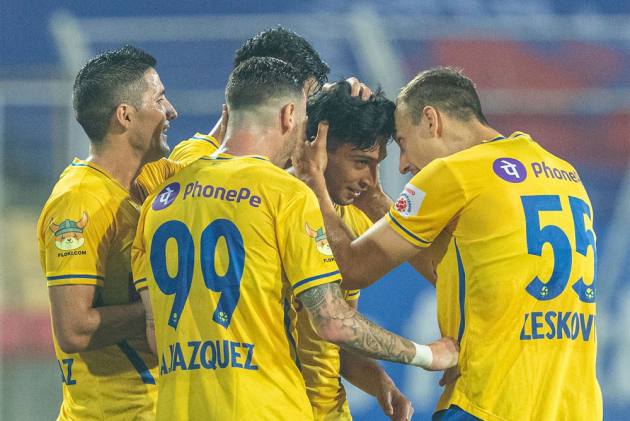 The win helped Blasters move to fifth-place in the 11-team ISL table with nine points from six matches, while holders Mumbai remain at the top with 15 points from seven outings. This was their second defeat.

Mumbai almost took the lead in the second minute when an Ahmed Jahouh pass found Cassio Gabriel whose effort was saved by Prabhsukhan Singh Gill but only as far as the post before it was cleared.

Igor Angulo got another chance three minutes later from a Mandar Rao Dessai corner but his attempt was saved by Gill.

Then, Vazquez saw his stinging shot saved brilliantly by Mohammad Nawaz. The Spaniard was at the heart of all Kerala moves as they looked the likelier side to score.

And they did close when Sahal volleyed a ferocious shot past Nawaz after being set up by Diaz.

It was more misery for the league leaders after halftime as Vazquez produced a moment of magic to start the fireworks.

Jeakson Thounaojam provided a lovely ball from the right side to Vazquez on the edge of the box and the 30-year old smashed a sumptuous volley into the top corner with aplomb.

It got worse for Mumbai when they were reduced to 10 men when Fall picked up a second yellow card and was sent off for a tackle on Diaz inside the box.

Diaz stepped up and converted the spot-kick to make it 3-0 and take the game beyond Mumbai.

Mumbai got their chances to pull things back but Bipin Thounaojam, Mehtab Singh and Raynier Fernandes saw their efforts go wide of target.

Vazquez also got a chance to double his tally but could not keep his balance in front of goal.

The result means that Hyderabad FC, Jamshedpur FC and Chennaiyin FC can now close the gap on the reigning champions.