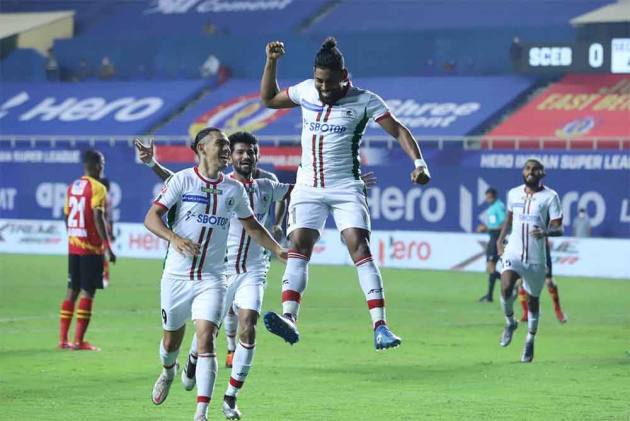 The red-and-gold brigade suffered defeats to their arch-rivals in both the matches last season, which was more to do with their troubled build-up and a last-minute entry to ISL.

Even as uncertainty surrounded East Bengal over their differences with their investors Shree Cement Ltd, the team under their new Spanish manager Manolo Diaz has looked better organised and secured a spirited 1-1 draw against Jamshedpur FC in their ISL opener.

Croatian central defender Franjo Prce drew first blood for SCEB early in the 19th minute but they could not hold on to their lead, conceding in first-half injury time to miss out on three points.

In contrast, it had taken five matches for the Robbie Fowler-coached SCEB to score their first goal of the season. The new gaffer would hope the likes of Prce, Antonio Perosevic, Bikash Jairu and Arindam Bhattacharya step up against their traditional rivals.

The draw in their opening match of this season stretched SCEB's winless run to five matches with their last victory coming against Jamshedpur FC on February 7 this year, in the last edition of the ISL.

The red-and-gold last won the grudge match on January 27, 2019 by 2-0 margin when both the teams were playing in the I-League. Diaz will have his task cut out against a formidable and well-set ATK Mohun Bagan.

"The players need to show their class (in the Kolkata derby) and build a structure. ATK Mohun Bagan is a very good team with experience and SC East Bengal is growing and at the time we need to improve the level of the players," the Spaniard said.

That the high-octane clash is scheduled early in the second round would mean that SCEB would be under less pressure and would look to express themselves fully.

With former ATK Mohun Bagan goalkeeper Arindam Bhattacharya now at the helm of SCEB as the captain, the team would look forward to the experienced pro.

"All the players look focused and know what this match means for the fans. We want to win it for them," Prce said.

"The Indian players in our squad keep talking about the importance of this match so I know the significance. It will be a tough battle, but we are ready for it," Prce said.

The former Lazio central defender will have the all-important task of thwarting the dangerous ATKMB forward lineup with Fijian star marksman Roy Krishna as his new partner and Hugo Boumous posing the biggest threats.

"We are playing against ATK Mohun Bagan rather than only against (Roy) Krishna and Hugo (Boumous). Yes, they are good players who can score goals but they need the whole squad to help them.

"So we're making plans to stop the whole team instead of only concentrating on Hugo and Krishna.

"For me, the whole squad of ATK Mohun Bagan is a threat. One or two players can’t win you a match, the team has to perform well collectively to win," said the most successful ISL coach.

Roy Krishna scored in both the legs of the Kolkata derby last season and he would look to start from where he had left.

Krishna has already opened his account and scored from the penalty, while Boumous scored a brace in their 4-2 win over Kerala Blasters.

French midfielder Boumous, who was acquired from defending champions Mumbai City FC, has been one of the mega signings this season.

Fast and tactically superior, the Frenchman, who won the Golden Ball award in the 2019-20 season while playing for FC Goa, is known for creating attacks as well as counterattacks.

He has provided the highest number of assists in the history of ISL -- 24 in 56 matches -- and is one of the best foreign players to have ever played in the league.