The goalless draw helped Mumbai City go top of the Indian Super League (ISL) 2021-22 table with 17 points, albeit with one extra game from second-placed Hyderabad FC. East Bengal are winless in 10 matches so far. 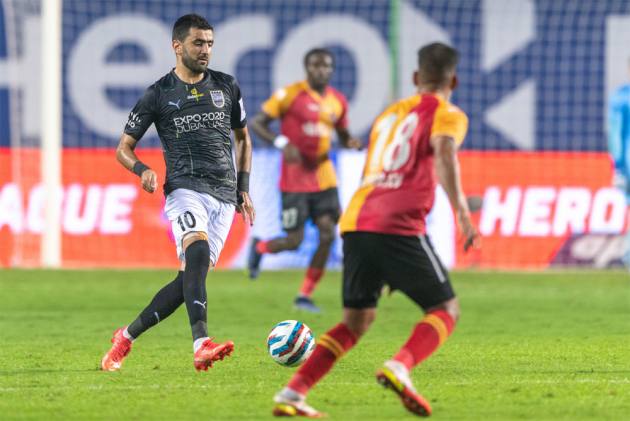 The result helped the Islanders reclaim the top spot from Hyderabad FC in the 11-team ISL table with 17 points, albeit with one extra game. East Bengal are winless in 10 matches so far.

Mumbai striker Igor Angulo was the first to test the goalkeeper, but his header was comfortably saved by Arindam Bhattacharja.

Daniel Chima Chukwu was next to threaten the goal on the other end, but his attempt from close-range missed the right side of the goal.

East Bengal were dealt an early blow with Joyner Lourenco picking up an injury. He was replaced by Ankit Mukherjee.

Both teams struggled to create clear scoring chances in the first half. The Islanders dominated the possession but found it tough to find spaces behind East Bengal backline.

Due to the resilient defending from the Red & Golds, both teams went into the halftime break on level terms.

East Bengal sent in Mohammad Rafique as a replacement for Bikash Jairu in in the second half. A few minutes post the restart, strong calls for a penalty from Mumbai players were denied by the referee as Adil Khaan allegedly fouled Cassio Gabriel inside the box.

The Brazilian then blasted a long-range drive which was expertly parried away by Bhattacharja. The frustration could be seen amongst the Mumbai ranks as Ahmed Jahouh came close with a long-range strike at the hour mark.

Vinit Rai made his Mumbai debut as Des Buckingham sent him alongside Ygor Catatau to inject more energy on the pitch.

Amarjit Singh Kiyam also picked up an injury and was replaced by Darren Sidoel with 15 minutes left to play.

Jahouh was the first player to get booked who picked up a fourth yellow card of the season and will be suspended for the next game.

The final stages of the match saw more determined defending from East Bengal as they frustrated the Islanders who could not create meaningful scoring chances.

The fourth official announced five minutes to be added for stoppages and the Islanders threw everything in their locker but could not find the goal they were looking for. In the end, both teams had to settle for a point each following a goalless draw.

Mumbai City are up against Bengaluru FC in their next match at the PJN Stadium on Monday whereas East Bengal will clash with high-flying Jamshedpur FC at the Athletic Stadium on Tuesday.