Chennaiyin FC are coming into the game after suffering two back-to-back defeats in ISL 2021-22. Jamshedpur FC enter into the contest after sharing points with Bengaluru FC and Kerala Blasters respectively. 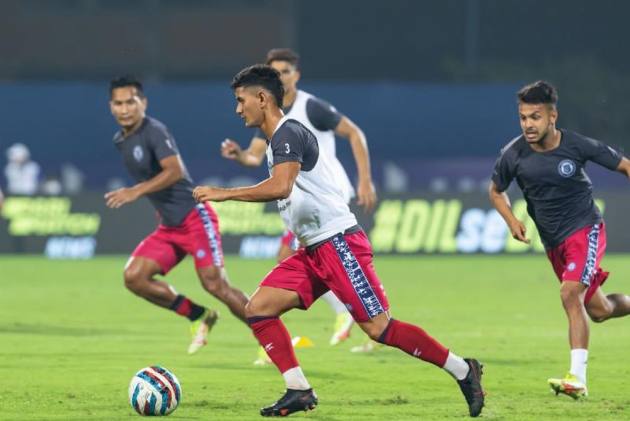 Jamshedpur FC would aim to exploit the chinks in Chennaiyin FC’s armour and arrest their winless streak when the two sides renew their rivalry in the Indian Super League (ISL) 2021-22 at the GMC Athletic Stadium in Bambolim on Sunday. (More Football Stories)

Chennaiyin have suffered two back-to-back defeats and the more worrying factor for head coach Bozidar Bandovic would be his usually watertight defence looking a bit shaky.

Chennaiyin did not have the rub of the green against Bengaluru FC in their last game, starting from goalkeeper Vishal Kaith to the backline, the former champions looked shaky.

The good part has been Mirlan Murzaev's growing influence on the team. He has scored two goals and provided two assists for Chennaiyin FC this season. He is their joint leading scorer along with Vladimir Koman.

They will also be without the services of striker Nerijus Valskis, who makd a dramatic transfer back to Chennayin from Jamshedpur. The Lithuanian striker will only be eligible to don the Super Machan shirt again next week.

Jamshedpur, on the other hand, failed to win their last two games, sharing the spoils with Bengaluru FC and Kerala Blasters FC but they will hope to cash in on Chennayin's recent defensive woes.

The Owen Coyle-coached side has played some eye-catching football so far with Greg Stewart at the heart of their good shows. Stewart has scored five goals and has four assists to his name this season His nine-goal contributions in the league are the joint highest along with Igor Angulo (9).

The Scottish attacker has already made heads turn and along with the likes of Jordan Murray, Jitendra Singh, Alexandre Lima the team has looked solid more often than not.

"Everybody would accept Jamshedpur has done really well and deserve more points on the board. What we have to do is focus on the remaining games and make sure we keep ourselves in those top spots," Coyle said.

When Chennaiyin and Jamshedpur face each other, it will be a contest between two teams who are on the opposite ends of the spectrum of attacking efficiency.

Jamshedpur take more shots per game than any other team in the ISL this season with 14.5 shots. Despite being above average in this metric, Chennaiyin are the least accurate shooters in the league.

Lallianzuala Chhangte could play his 50th match for Chennaiyin, becoming the seventh player to make 50 or more appearances for the two-time champions. JFC's Mobashir Rahman is also lined up to achieve a similar feat.