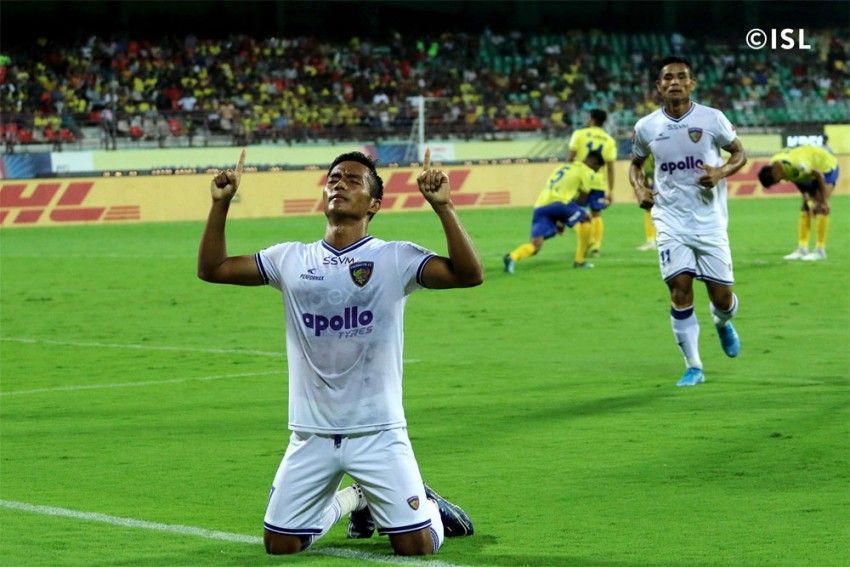 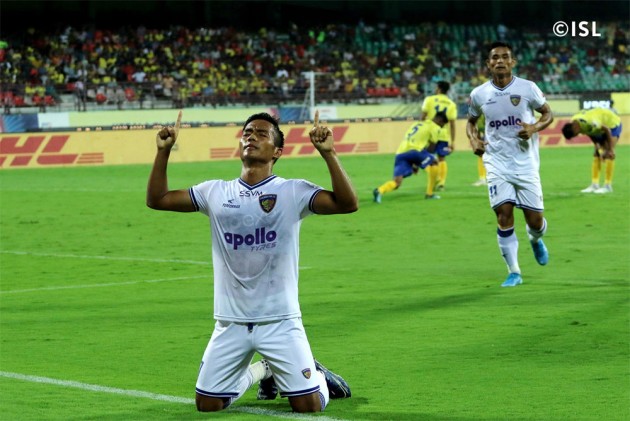 The South Indian derby in the Indian Super League turned out to be a high-scoring affair as Chennaiyin FC demolished Kerala Blasters FC 6-3 at the Jawaharlal Nehru stadium at Kochi on Saturday.

Chennaiyin roared into a three-goal lead at half-time, thanks to a brace from Rafael Crivellaro (39th, 45th) and another goal from Nerijus Valskis (45th).

But a hat-trick from Bartholomew Ogbeche (48th, 65th, 76th), the first of the season, threatened to bring Kerala Blasters back into the match. A brace from Chhangte (59th, 80th) and another Valskis goal (90th) sealed the result in favour of the away side.

Though Kerala started the first half well, they could not fashion any real opening. Chennaiyin too were a bit passive as the match was locked down in the midfield. However, Chennaiyin came to life in spectacular fashion just as the first half was drawing to a close.

In the 39th minute, Chennaiyin took the lead after Kerala goalkeeper TP Rehenesh passed the ball straight to Crivellaro who sweetly tucked it home.

Things got worse for Kerala in the 45th minute when Valskis combined beautifully with Crivellaro before receiving the return pass and lashed a finish home.

A minute later, Kerala were caught napping again. Anirudh Thapa sent a through ball forward for Valskis who was offside. But the Lithuanian did not interfere with play and Crivellaro took advantage, surged towards goal and finished with aplomb to make it 3-0 in no time.

The setbacks sparked a reaction from Kerala in the second half with Ogbeche leading them. Three minutes after the resumption, the Nigerian got on the end of a hopeful cross into the box from Jessel Carneiro and turned it in past goalkeeper Vishal Kaith.

However, Chennaiyin restored their advantage after yet another howler from the Kerala defence. Abdul Hakku's intended pass for Rehenesh was intercepted by Valskis who set up Chhangte for Chennaiyin's fourth goal.

Ogbeche had other ideas and scored a quickfire brace to make it 4-3. In the 65th minute, he beat Kaith with a clinical shot from outside the box before heading in Halicharan Narzary's cross in the 76th minute.

When one thought Chennaiyin had lost the plot, Chhangte settled their nerves with a fine strike from long range in the 80th minute before Valskis helped himself to a late second goal to seal a goal glut.