ATK may have qualified for the play-offs, but the loss came as a big blow to their AFC Champions League qualifying aspirations with FC Goa taking a three-point lead at the top with only a match left for the league stage to conclude 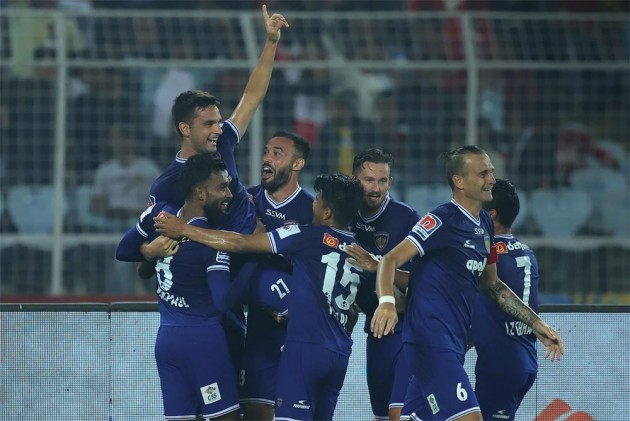 Chennaiyin FC snapped ATK's four-match winning run with a dominating 3-1 victory to keep their play-off hopes alive in the Indian Super league at Kolkata on Sunday.

ATK may have qualified for the play-offs, but the loss came as a big blow to their AFC Champions League qualifying aspirations with FC Goa taking a three-point lead at the top with only a match left for the league stage to conclude.

Playing their last league match at home this season, it was clearly not ATK's day as Chennaiyin started off as the better side and managed to make use of the pressure to go one up with a top class finish from Rafael Crivellaro in the seventh minute.

Eli Sabia set it up for the Brazilian attacking midfielder as he made a solo run from the half line before slotting it home with a left-footed finish to stun the 37,406-strong home fans at the Salt Lake Stadium.

ATK made some attacking moves but all their efforts lacked power and skill as the Antonio Lopez Habas-coached team looked lacklustre in the first half.

Chennayin FC and ATK struck back to back goals in the space of one minute through Andre Schembri and Roy Krishna respectively.

First it was Schembri who doubled the lead with his header in front of an open net from a corner with ATK goalkeeper Arindam Bhattacharya out of position in the 40th minute.

Immediately, ATK pulled one back through their captain Roy Krishna after being set up by a Javier Hernandez long ball.

Chennaiyin then found a stoppage time goal (90+4th) through Nerijus Valskis who gave a Cristiano Ronaldo-style celebration as they jumped to fifth spot ahead of Odisha FC (25 points) with two matches left.

ATK narrowly missed out on a goal at the end of first-half with Roy Krishna going past Chennaiyin FC goalkeeper Vishal Kaith but only to hit it wide from a difficult angle.

The home side dished out an attacking second half but a goal eluded them.

ATK scored in the 85th minute with Roy Krishna heading it in with a diving effort but only to be adjudged offside much to their disappointment.

In the 89th minute, Chennaiyin goalkeeper Vishal Kaith spilled a ball inside the box and Victor Mongil failed to direct the loose ball into the net.

But Valskis made sure ATK were left to rue these misses when he broke forward on a counter in injury time and lifted a finish past Arindam who was way off his line to seal a brilliant result for Chennaiyin.

ATK will conclude their league campaign in Bengaluru on February 22.