The two Kolkata heavyweights will clash swords in the Indian Super League for the first time, on November 27, after the respective teams' foray into the top-tier tournament 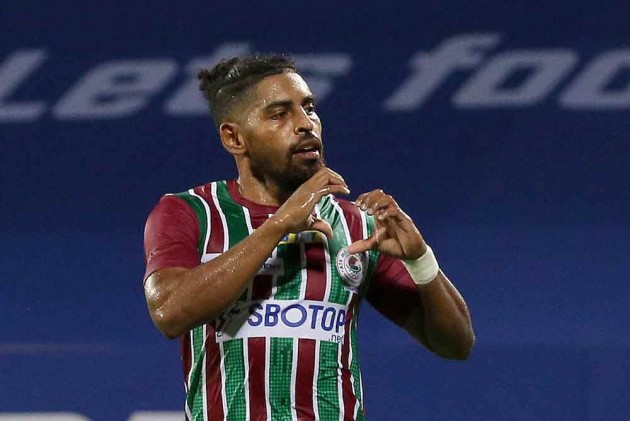 ATK Mohun Bagan star forward Roy Krishna has set his sights on their upcoming ISL clash against arch-rivals SC East Bengal, saying they have to win the game "at any cost". (More Football News)

The two Kolkata heavyweights will clash swords in the Indian Super League for the first time, on November 27, after the respective teams' foray into the top-tier tournament this season and the Fijian International is all pumped up.

"I know, our fans will wait with interest to see our victory in the derby match. We have to win the match at any cost," the 33-year-old said at the team hotel here on Saturday.

"I have heard a lot about the Kolkata derby. I am waiting to play that match as I have never seen that match or even had a chance to play."

He had scored the solitary goal in their win over Kerala Blasters in the ISL opener.

Roy Krishna had witnessed the fan frenzy of the Kolkata derby.

"Our car was stuck in a traffic jam. I was thinking, if there are so many supporters on the street outside the field, then what about inside the field," he remembered.

He said they would miss the atmosphere this time with the matches held behind closed doors in view of the COVID-19 pandemic.

"You can't come on the field this time because of the COVID-19 pandemic. I will miss that atmosphere but I request everyone to pray for our team, keep supporting us."

Roy Krishna, who was ATK's top scorer with 15 goals to his name in their triumphant campaign last season, also opened the account this time to script a 1-0 win over the southern outfit.

For ATK, this was their first win from seven matches against Kerala Blasters in the last three seasons as they had lost thrice and drawn as many times.

"We won the Kerala match after a long time. This win will help us in the derby."

ATK Mohun Bagan may have collected full points but the team looked rusty in the first half and Roy Krishna missed as many as three chances. He blamed it on the absence of a pre-season.

"I regret not scoring a hat-trick. I wonder why I wasted the opportunity. Besides, I am learning from this that I have to work harder. More training is needed. I played after practising for only two weeks. I hope I can improve myself," he said.

The goal came after the hour-mark as a result of a defensive lapse.

"I have spent most of the last two months in quarantine. At that time, my wife Nazia from Fiji encouraged me in many ways every day. She gave me many suggestions to reduce my mental fatigue.

"My family was up at 2 am and watched the game. They encouraged me over the phone," he said while dedicating the goal to his family.

Coach Antonio Habas, too, is all geared up for the November 27 blockbuster clash.

"Now we have to think about East Bengal after Sunday. There will be a continuous practice," he said.

Australian star David Williams did not start for ATKMB and was substituted with eight minutes left on the clock.

Habas said they had to be cautious since it was the first match of the season and the humidity added to the woes.

"It is not good for a player to play 90 minutes in this humidity and with this intensity when you have not played for eight months. We have to substitute everyone be it Roy, Williams or Edu (Garcia). But I think he played well."

ATK also had an injury setback to Michael Soosairaj who was left with a swollen left leg after a tackle by Prasanth Karuthadathkuni in the 12th minute.

But team sources said the injury seemed "minor" and the ATKMB left winger did not require an MRI.