Assured of a silver, the Indian duo was on par with Russia's Vitalina Batsarashkina and Artem Chernousov at 12-12 before losing the last two series to go down 12-16. 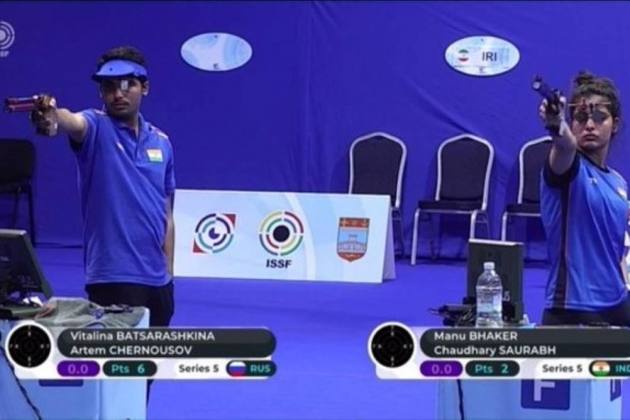 Continuing their impressive run, the Indian duo of Saurabh Chaudhary and Manu Bhaker clinched the silver medal in the 10m air pistol mixed team event at the ISSF Shooting World Cup in Osijek in Croatia, on Saturday. (More Sports News)

Already assured of a silver, the Indian duo was on par with Russia's Vitalina Batsarashkina and Artem Chernousov at 12-12 before losing the last two series to go down 12-16.

Representing the other Indian team in the same event, Yashaswini Singh Deswal and Abhishek Verma missed out on a bronze medal.

Deswal and Verma, who qualified in the third place, were completely outplayed by Iran's Golnoush Sebghatollahi and Javad Foroughi, losing 7-17 in the bronze play-off.

It was a bad day in the office for the Indian rifle shooters, competing in the 10m air mixed event.

Both teams failed to reach the final. The pairing of Elavenil Valarivan and Divyansh Singh Panwar managed to reach the second qualification round, finishing sixth with a total of 416.1.

The duo of Anjum Moudgil and Deepak Kumar failed to clear the first qualifying round. They finished a disappointing 15th with a total 624.6.

Chaudhary and Bhaker's silver takes India's medal count to three. Both shooters have already won a bronze each.

While Chaudhary had picked a bronze medal in men's 10m air pistol on the opening day, Bhaker alongside Deswal and Rahi Sarnobat had won the bronze in the 10m air pistol women's team event.

Russia currently leads the medal tally with three golds as many silver and one bronze.

The event is Indian shooting team's final competitive outing before the Tokyo Olympics.