It Was Do-Or-Die Game For Me, Says SRH All-Rounder Vijay Shankar 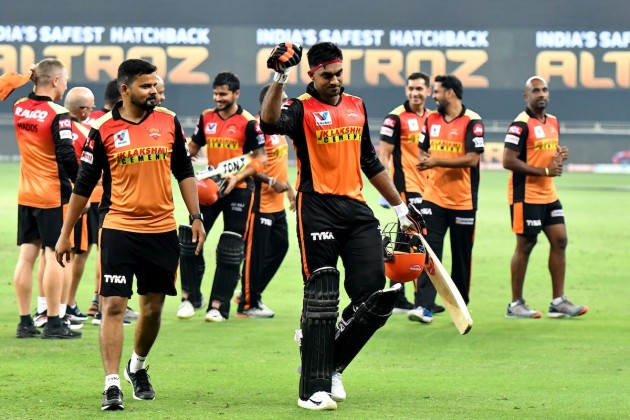 The comprehensive eight-wicket win by Sunrisers Hyderabad proved to everyone that the Hyderabad franchisee is more than just Jonny Bairstow and skipper David Warner show. The side has come under lot of criticism with Bairstow and Warner leading the batting charge, while the rest of the batsmen have struggled. (RR vs SRH HIGHLIGHTS | POINTS TABLE)

All-rounder Vijay Shankar has had a horrid time in the league so far. From going wicketless to even struggling to get going with the bat, Shankar has hung in there waiting for his chance. On Thursday, Shankar repaid the faith shown in him by SRH stitching an unbeaten match winning partnership with Manish Pandey.

All-rounder Vijay Shankar says he treated the match against Rajasthan Royals as a 'do-or-die game' as his good show with both bat and ball may have saved his place in Sunrisers Hyderabad's playing XI.

Manish Pandey (83) and Shankar (52) stitched an unbroken 140-run partnership to help SRH secure a comfortable eight-wicket win, which lifted the team to the fifth spot with eight points from 10 games.

"If you ask personally it was a do-or-die game for me. That's how I saw this game. I didn't have the best of time with the bat, so I had to perform in this game and fortunately or unfortunately, we lost early wickets which made the team to send me up the order," Shankar said.

The Tamil Nadu cricketer, who also economical with the ball and picked up a wicket too.
"We just slipped in the last minutes. A win like this will give confidence to each and every member of the team. We can win the remaining games and keep ourselves alive in the tournament," he said.

After SRH lost two early wickets during their chase, Shankar said their plan was simple -- forge a partnership and take the game as deep as possible.

"We wanted to take the game deep so I opened up and then we got few boundaries and it made things easier for us," he said.