Leading drivers were unable to cross the line in time to set a final flying lap in Italian Grand Prix qualifying, gifting pole position to Charles Leclerc at Monza 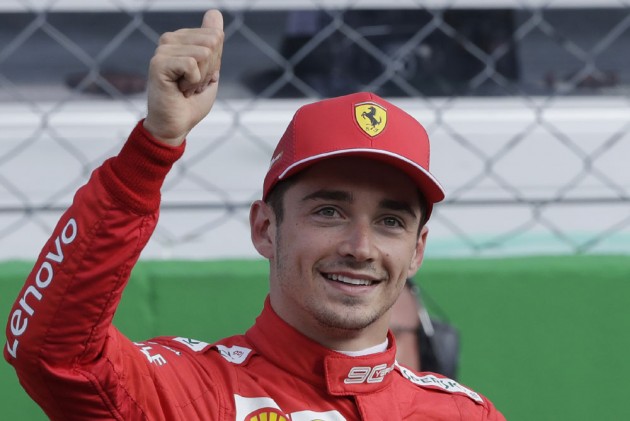 Charles Leclerc claimed his second consecutive pole position amid a chaotic finish to qualifying at the Italian Grand Prix.

With nine drivers poised to set their final flying lap in Q3 and just five hundredths of a second separating the top three, jostling for position on the out lap meant the leading men did not cross the line before time expired.

The outcome of the anticlimactic finish was Leclerc remained in the first position he had claimed after the first runs at Ferrari's home race, with Lewis Hamilton 0.039seconds behind in second and Valtteri Bottas just 0.047s back in third.

Sebastian Vettel was fourth ahead of Daniel Ricciardo and Nico Hulkenberg in the two Renaults.

Leclerc and Sainz get past the start/finish line before the clock stops, everyone else doesn't make it in time! #ItalianGP #F1 pic.twitter.com/eKAqYy33Xm

As the session ended, race stewards promptly announced they would be investigating the events on the out lap.

Kimi Raikkonen had crashed earlier in Q3 to bring out a red flag just after the top drivers completed their opening efforts, delaying the conclusion of the session.

Carlos Sainz, who did cross the line in time amid the late drama, was seventh for McLaren, with Alex Albon, Raikkonen and Lance Stroll rounding out the top 10.

Leclerc, who was also on pole last week in Belgium before going on to take his first Formula One victory, said: "I'm happy with pole but it's a shame at the end it was a big mess. I hoped our last lap was enough."

Mercedes boss Toto Wolff was more damning, saying: "That was not even worthy of a junior formula. Everybody looks like idiots."

Max Verstappen was unable to set a time due to a power issue in Q1, but he was already due to start at the back of the grid after receiving an engine penalty.

The opening session, topped by Leclerc, was red-flagged after a technical issue for Sergio Perez, who was also among the eliminated drivers.

Hamilton topped his first session of the week in Q2 as Lando Norris and Pierre Gasly, two of the other stars with penalties, dropped out.

After that effort and even after falling just short in the first runs of Q3, the championship leader and Bottas looked poised to challenge the Ferraris for pole, only for the bizarre events of the out lap to deny fans a thrilling final duel.

Earlier, FP3 – which like FP1 and FP2 saw Ferrari come out on top – had been delayed after a major crash for Formula Three driver Alex Peroni, who fortunately was unhurt.