Mercedes locked out the front row for Sunday's Italian Grand Prix, while it was a bad day at the office for Ferrari 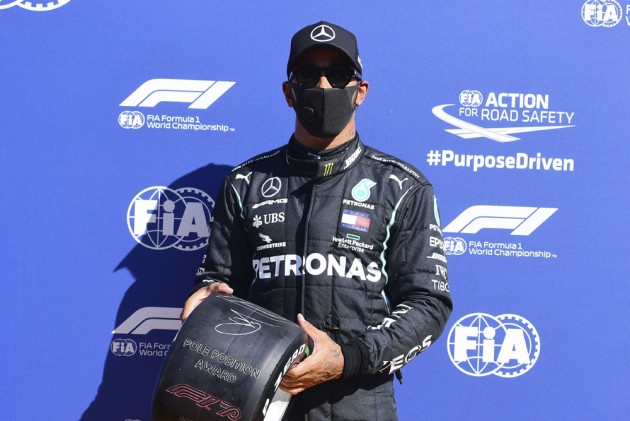 Lewis Hamilton set a new track record to clinch pole position at the Italian Grand Prix in emphatic fashion as Mercedes secured the front row on what was a miserable day for Ferrari at Monza. (More Sports News)

Championship leader Hamilton was given a bit to think about by Valtteri Bottas, but the Brit produced clean laps and ultimately held off his team-mate in Q3 thanks to a new track record of one minute, 18.887 seconds.

But it was a completely different story for Ferrari on home territory, with Sebastian Vettel failing to even get out of a dramatic Q1, as the German almost collided with George Russell in the final minute.

The day once again belonged to Mercedes, however, as Hamilton sealed a sixth pole in eight attempts this season, with the other two claimed by Bottas.

A new track record!! And a seventh Monza pole for @LewisHamilton!!  pic.twitter.com/AY6fRKXmrm

Vettel voiced his frustrations at the Alfa Romeos at the end of a chaotic Q1, with Kimi Raikkonen and Antonio Giovinazzi engaging in some aggressive driving in an attempt to skip some queuing.

But Vettel's complaints did little to distract from a bad day individually, as he was eliminated in Q1 for the first time since Hockenheim last season, sitting 17th.

Similarly, Ferrari were left with both drivers outside of the top 10 in their home GP for the first time since 1984, as Charles Leclerc was down in 13th.

Arguably the drive of the day came from Carlos Sainz Jr, with the McLaren driver rounding off the front three, while Racing Point's Sergio Perez and Max Verstappen of Red Bull came in just behind.

Lando Norris in sixth concluded a positive day for McLaren, coming in 0.044 seconds ahead of Daniel Ricciardo.

Lance Stroll, Alexander Albon and Pierre Gasly rounded off the top 10 ahead of Sunday's race.