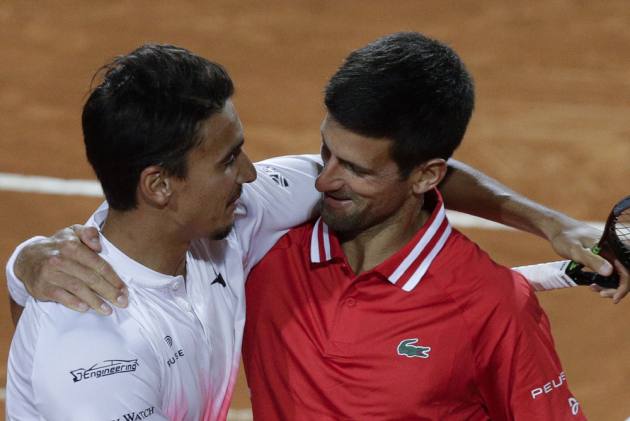 Novak Djokovic dug deep in the face of fierce Roman resistance to set up a showdown with Rafael Nadal in the men's final at the Internazionali d'Italia. (More Tennis News)

World number one Djokovic came from a set down overnight to beat Stefanos Tsitsipas 4-6 7-5 7-5 early on Saturday, before returning to the court to face Italian Lorenzo Sonego in the evening.

The Rome crowd raucously rallied behind Sonego, who beat Andrey Rublev earlier in the day, and the 26-year-old rose to the challenge but eventually fell to a 6-3 6-7 (5-7) 6-2 defeat.

Djokovic had match points before serving for it at 6-5 in the second set, yet it was to prove a stirring game as the noisy home crowd encouraged Sonego, who snatched a gutsy break. The tie-break looked set to be wholly one-sided when Djokovic raced 3-0 ahead, but it was soon back on serve, partisan spectators at the Foro Italico roaring in delight at a double fault from the Serbian.

From 4-2 behind, Sonego surged to 6-4 ahead in the tie-break. He failed to convert a first set point when ripping a forehand into the net, but the set was his when Djokovic sent a backhand service return long.

Sonego then had 0-40 against the Djokovic serve at the start of the decider, but he could not force the break, and the top seed gained strength from that escape, eventually cruising to victory.

Five-time Rome champion Djokovic said on Amazon Prime: "I bounced back very well after the second set. Maybe if he started with a break up in the third, things would look differently. I also had my chances and I only had myself to blame for not closing the match in straight sets.

"But he's a quality player, very dynamic, it's not easy to play against him and obviously he had the crowd behind him. It was an electric atmosphere. In the end I managed to close out the match really well."

Looking ahead to tackling Nadal, Djokovic said: "I need to recover. Hopefully I'll have fresh legs because that's what I definitely will need and it's necessary to have a chance against Rafa. He also had some tough matches [this week] and hopefully I'll be fresh and I'll give it all."

While Djokovic and Sonego thrashed away into the night, nine-time champion Nadal had no such workload issues on Saturday.

Nadal beat Alexander Zverev on Friday to set up a semi-final against American Reilly Opelka, and the Spaniard snatched a 6-4 6-4 win from that contest to reach the title match.