From England to Italy, it looked like title parties were in full flow. All that was missing was the trophy. The Italians will have to come back on Sunday to Wembley to collect that and complete this renaissance 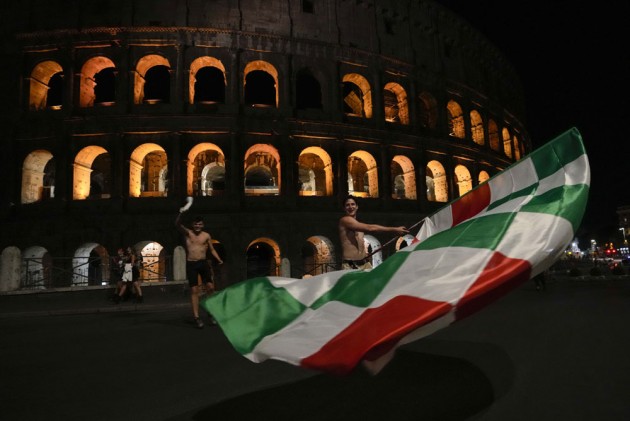 Bouncing in a huddle on the Wembley Stadium field, roared on by thousands of fans, Italy's players savored the celebrations, soaking up the scenes they have been waiting so long to experience again.

Back in Rome, supporters packed into piazzas and descended on the ancient Colosseum, speeding past on motorbikes waving flags even as midnight was approaching once Spain had been beaten on Tuesday.

From England to Italy, it looked like title parties were in full flow. All that was missing was the trophy.

The Italians will have to come back on Sunday to Wembley to collect that and complete this renaissance of a great soccer nation in the European Championship final.

“Almost no one believed we could do it,” Italy coach Roberto Mancini said.

“And yet we are into a final.”

The last major tournament — the 2018 World Cup — didn't even feature the Azzurri.

It was Spain who helped to deny them qualification for the first time in six decades. Winning the Euro 2020 semifinal match on penalties felt like the latest redemption chapter from the despair of not being at the World Cup for the four-time champions.

In doing so, Mancini has banished old notions of dull, ultra-defensive Italian teams. This is a team captivating audiences far beyond Italy with a thrilling determination to attack and entertain.

It's not been without maintaining a defensive solidity. Mancini can still turn to a 36-year-old veteran in Giorgio Chiellini, who has helped to extend the unbeaten run to 33 matches.

But then there is the new generation not scarred by the World Cup qualification failure — particularly 23-year-old forward Federico Chiesa, whose curling strike put Italy ahead in the 60th minute.

“The players did want to do something differently,” Mancini said through a translator. “They did want to play a brand of football that people enjoy and thus far they have been able to do that.”

Even by not having it all their own way all the time.

The group stage was a breeze. Turkey, touted as an outside challenger going into the tournament, was brushed aside 3-0. There were another three goals without reply against a Switzerland side that would go on to oust France. Wales was beaten 1-0 with many of the reserves deployed with qualification already settled.

The test of the team's resolve came on the first trip away from Rome to Wembley when extra time was required before beating Austria 2-1. Then came the threat of the world's top-ranked side but Belgium was also eliminated 2-1 — this time within 90 minutes.

Spain posed new questions of the Italians, making it hard to get control of the ball with their passing moves frustrating at times a midfield featuring Marco Verratti and Jorginho.

“There are some games when you have to suffer, but we deserved to be here,” Mancini said.

“We knew it was going to be tough. It wasn't easy, and Spain surprised us at the start by deciding to play without a striker.

“This group, however, is amazing. Everyone wants to win, but this group of players wanted to do something special and they just did that.”

For the coach who vowed a “rebirth” after being hired in 2018, the mission seems to have been turbo-charged by the league winner with Inter Milan and Manchester City.

Whatever happens in the European Championship final on Sunday against either England or Denmark, there's another shot at a trophy in October with Italy through to the semifinals of the Nations League.

“They believed right from Day 1,” Mancini said, “that we could produce something incredible.”