Italy was held to a 1-1 draw by Bulgaria, while Spain lost 2-1 away to Sweden to drop to second place in Group B 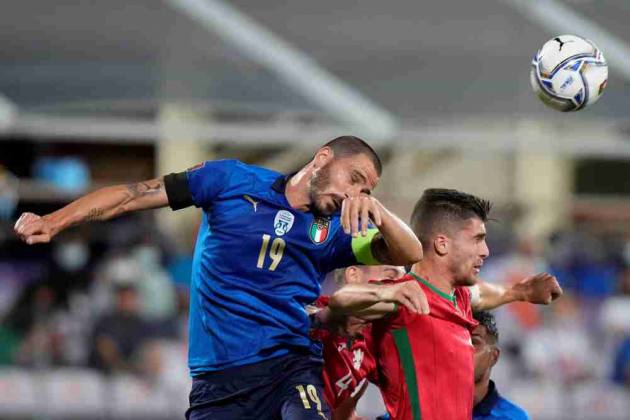 Italy finally came back down to earth a bit in its first game as European champion. (More Football News)

Less than two months after winning the European Championship at Wembley, Italy was held to a 1-1 draw by Bulgaria in World Cup qualifying on Thursday.

That ended Italy's perfect start to the qualifying campaign but nevertheless matched Spain's record run of 35 matches unbeaten, set between 2007 and 2009.

Spain lost 2-1 away to Sweden to drop to second place in Group B, while England and Belgium earned big wins to consolidate their group leads.

Federico Chiesa gave Italy the lead after a dominant start but the Azzurri conceded its first goal in the qualifiers when Atanas Iliev leveled at the end of the first half. Some great stops by Bulgaria goalkeeper Georgi Georgiev prevented Italy from restoring its lead.

Only the group winners directly qualify for the World Cup. Second-place finishers face a playoff.

Here's a look at the action in each group.

Sweden came from behind to beat Spain and leapfrog the visitors for first place.

Carlos Soler scored five minutes into his debut for Spain to put the visitors in front, but Aleksander Isak leveled seconds later.

Viktor Claesson put Sweden ahead for good in the 57th. Only some desperate defending by Spain's defenders denied Isak a chance to add another goal on the counterattack.

Sweden has a perfect nine points from three games, while Spain fell to second place with seven points from four games.

Kosovo moved up to third after beating Georgia 1-0.

Mancini had recalled all the fit players from his European Championship-winning squad for the three World Cup qualifiers and nine of the starting lineup against Bulgaria started the Euro 2020 final against England in July.

The Azzurri dominated from the start and took the lead in the 16th minute when Chiesa played a one-two with Ciro Immobile before firing into the bottom right corner.

Italy seemed fully in control and had several chances to extend its lead before Bulgaria leveled five minutes from halftime against the run of play. Kiril Despodov burst down the left before sending in a low pass for Iliev to sweep past Gianluigi Donnarumma.

Lithuania is bottom of the group with zero points and lost 4-1 at home to Northern Ireland.

Romelu Lukaku scored twice as top-ranked Belgium came from an early goal down to beat Estonia 5-2 and stay atop Group E.

Estonia midfielder Mattias Käit put the hosts ahead in the second minute but the heavily favored Red Devils were quick to turn things around.

With 10 points from four games, Belgium retained a three-point lead in the group ahead of the Czech Republic, which defeated Belarus 1-0. Belgium has scored 17 goals in the campaign, the most of all European teams. Wales and Belarus are on three points while Estonia is pointless.

England weathered a hostile atmosphere to beat Hungary 4-0 in its first game since losing the Euro 2020 final.

Raheem Sterling, Harry Kane and Harry Maguire scored in a 14-minute flurry and Declan Rice added a second-half goal as England secured a fourth straight victory in the group to extend its lead to five points on the road to qualifying for Qatar.

Poland is second after beating Albania 4-1 while Andorra earned its first win by beating fellow minnow San Marino 2-0 at home.

Germany beat Liechtenstein 2-0 to move into second in the group, a point behind surprise leader Armenia.

Goals in each half from Timo Werner and Leroy Sané helped Germany to a labored win in its first match under new coach Hansi Flick.

Armenia dropped its first points of the campaign with a 0-0 draw against North Macedonia, which remained third.

It is three points behind Armenia and a point above Romania after it won 2-0 in Iceland.