It's Impossible Not To Depend On Lionel Messi, Admits Barcelona Coach Ernesto Valverde 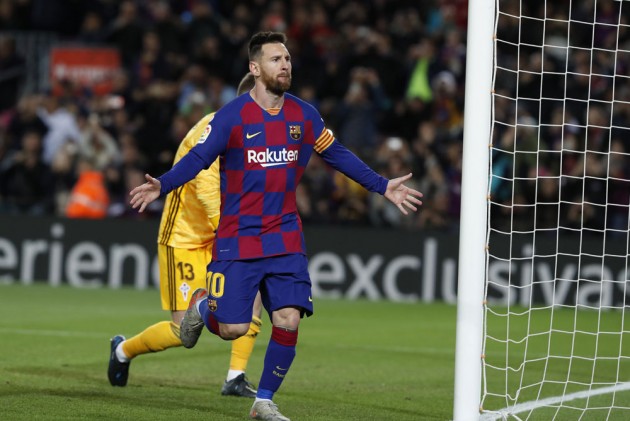 Ernesto Valverde admitted Barcelona cannot help but depend on Lionel Messi after the talismanic forward scored a hat-trick to inspire a 4-1 La Liga victory over Celta Vigo. (More Football News)

Messi's treble came at the end of a week that began with a 3-1 defeat at Levante and was not helped by a goalless draw at home against Slavia Prague in the Champions League.

Barcelona were short of their best against struggling Celta at Camp Nou but Messi, who had scored six goals in his previous six games, converted a penalty and two free-kicks to all but carry his side to victory on Saturday.

Speaking to reporters after the game, head coach Valverde underlined the Argentina international's importance, telling reporters: "It's impossible not to depend on Messi. That's how it works. He lights up everything.

"Today we were fluent and he scored three times. It is an advantage that we have, that our opponents fear and that is fine.

"When we win, we all win. Those who play are many, besides Leo.

"Everyone does their job."

Valverde admitted the defeat at Levante created an unsettled atmosphere at Camp Nou, saying: "When you do not win, there is uncertainty surrounding your environment.

"It's good that it happens because you have to react. Because when you are used to a regular feeling, it forces you to improve."

Valverde said he hoped the forthcoming international break would benefit his players ahead of a tricky run of fixtures.

The Blaugrana are top of La Liga on goal difference after 12 games, and will travel to Leganes on November 23 before meeting Borussia Dortmund at home in the Champions League.

"We will take the opportunity to rest," said Valverde. "Some players leave, others stay, but after this break come very strong matches in which we play a lot."