Leicester City did not have to rely on Jamie Vardy to beat Chelsea in the FA Cup final, but the striker is now aiming for further success 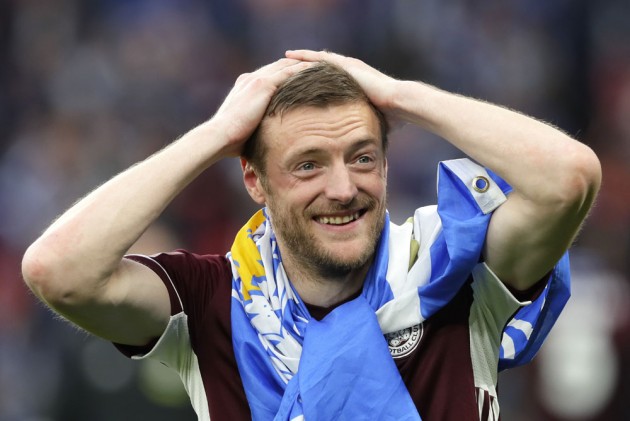 Jamie Vardy is looking to add to his growing medal collection with Leicester City after helping the Foxes to win their first FA Cup. (More Football News)

Leicester, who won the Premier League with Vardy in the side in 2015-16, finally got their hands on the cup with a 1-0 win over Chelsea on Saturday.

Youri Tielemans scored the sole goal for Brendan Rodgers' team at Wembley, with a late own goal from Wes Morgan disallowed following a VAR review.

Vardy has now played in every round in the competition including the preliminary stages, having started his career in non-league football, but had a quiet final.

Neither of the striker's two shots under the arch hit the target, while he lost possession with five of his 14 touches.

It mattered not, though, as Leicester claimed the FA Cup after four previous final defeats, and that encouraged Vardy to set his sights higher still.

"Now we've got one, we're going to be wanting some more. Now it's hard work, dedication and keep progressing as much as we can."

Leicester could cap a stunning stretch by qualifing for the Champions League if they beat Chelsea again at Stamford Bridge on Tuesday.

Such an achievement would firmly establish manager Rodgers' side among the elite in English football.

"It was the big challenge I wanted to take coming to Leicester," Rodgers told a news conference.

"Having worked at incredible clubs like [Liverpool] and Celtic, could I go to a club outside of the top six and could we challenge and could we disrupt that hierarchy within the league?

"We'll always be a way behind in terms of financial perspective, but can we compete, can we perform and can we fight to challenge?

"And then obviously, on days like today, when you have the opportunity to create history, can you do that? Thankfully, we've been able to do it."

But Rodgers, repeatedly emphasising the financial gulf between Leicester and their opponents along with the rest of the 'big six', could offer few assurances on the futures of his cup final stars.

Tielemans, who now has nine goals in all competitions this season, would surely interest rivals, it was suggested.

Leicester fans did not have to look far for reminders of past departures on Saturday as N'Golo Kante started for Chelsea and Ben Chilwell almost turned the game on its head from the bench.

Kante had a relatively quiet outing, contesting just six duels, but Chilwell drew a superb save from Peter Schmeichel and forced the own goal that was then disallowed for his offside.

"I know the direction that we're going in and I know that Leicester in the future, I'm sure, will lose players," Rodgers said.

"We don't want to, it's not something we think about so much, but it's the nature of the game.

"But it's not to think about at this stage. You can see the happiness in the players, you can see the ambition we have, and of course you see the level that they play at.

"I've got a really talented group of young guys that want to get better, and while I'm the coach and manager, until the very last day they're at the club, I'll always continue to do that."