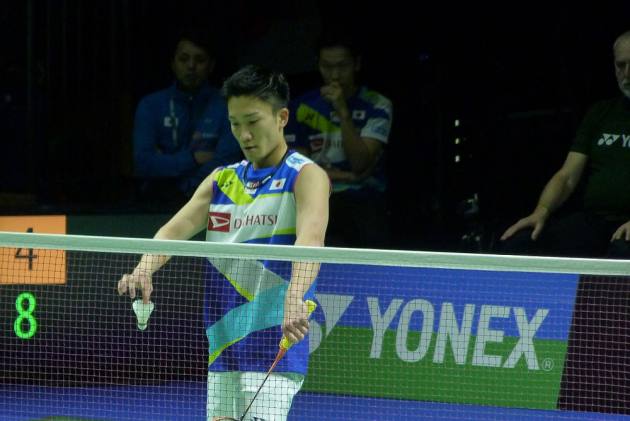 Japan's badminton king Kento Momota said he was again dreaming of Tokyo Olympics gold on Friday but didn't know when he'd return to action after a car crash that left him fearing his career was over. (More Badminton News)

The world number one admitted his "spirit was almost broken" after the accident in January -- hours after he won the Malaysia Masters -- which killed the driver of the vehicle taking him to Kuala Lumpur airport.

Momota, 25, had been expected to be out for two months but he needed surgery for an eye socket fracture in February, dashing plans to return for this month's All England Championships.

"I thought about it. How long will it take?" he said, when asked if he had been worried that he might never play again.

"There were times when my spirit was almost broken."

Momota, who missed the 2016 Olympics after he was suspended for visiting an illegal casino, is now back in training but doesn't know when he'll be compete again.

"Of course, the Tokyo Olympics is on my mind," he told reporters in Tokyo.

"I have received support from so many people and received such passionate words of encouragement that now, I feel that I really want to go for the gold at the Tokyo Olympics."

Momota added: "I feel I am regaining the sharpness of my body and movements.

"The issue I have to tackle now is that whenever I'm on the court, I want to get into the action. I have to make sure I take it easy."

Coming off a year in which he captured a record 11 titles, Momota had looked set to go into Tokyo 2020 as the overwhelming favourite to win men's singles Olympic gold.

But his preparations were dealt a blow when he was injured in the crash in Kuala Lumpur, suffering cuts and heavy bruising after the vehicle he was travelling in collided with a lorry.

Momota said the recovery process had been difficult.

"I have never been away from badminton for so long. I am very much enjoying hitting shuttlecocks. I'm having very fulfilling practices again," he said.