Captain Joe Root, man of the match in his 100th Test, paid tribute to James Anderson after he showed his class yet again in Chennai. 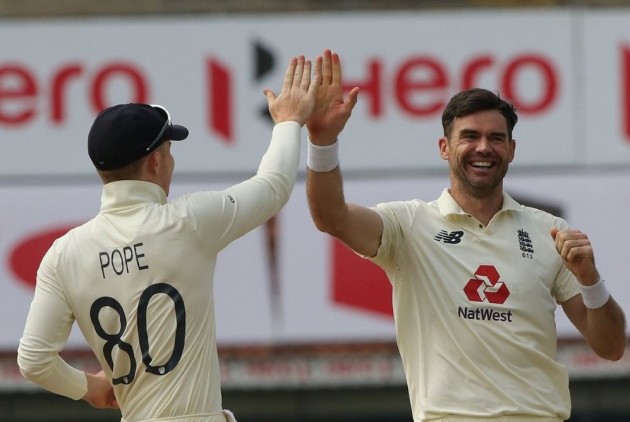 Joe Root hailed James Anderson as the "GOAT of English cricket" who is "ageing like a fine wine" after England's leading Test wicket-taker produced another masterclass of seam bowling in an emphatic win over India. Match Highlights | News | Scorecard

The magnificent Anderson produced one of the great spells before lunch in Chennai on day five of the first match of the series, putting the tourists well on their way to a 227-run victory.

Anderson generated huge reverse swing, taking three wickets for six runs in five overs during the morning session, and India could not contend with his skillset as the 38-year-old finished with brilliant figures of 3-17.

Impressive spinner Jack Leach took 4-76 as India were bowled out for 192 after lunch, half-centuries from captain Virat Kohli (72) and Shubman Gill (50) proving to be in vain.

It was a dream 100th Test for Root, who made a sublime double century and was named man of the match after matching Michael Vaughan's record of 26 victories as skipper for England in the longest format.

Root paid tribute to the ageless Anderson after his final-day heroics.

Monday, 9am: wE mUsT dEcLaRe!

The in-form batsman said: "He is the GOAT of English cricket. He finds ways of constantly challenging himself and getting better.

"At 38 to still be getting better and be as fit as ever is fantastic - he is a great role model. His skill level is as good as anyone you'll ever see."

Root added: "He just keeps getting better and better, like a fine wine. His skill levels are as high as ever and his fitness levels.

"He sets a great example for all the younger bowlers in our squad and I can see him playing on for many more years, which is very exciting."

On England's overall performance, Root said: "It's been a fantastic five days with the way we came back and executed the game plan, it was really, really pleasing and we'll enjoy this before getting ready to come back again."